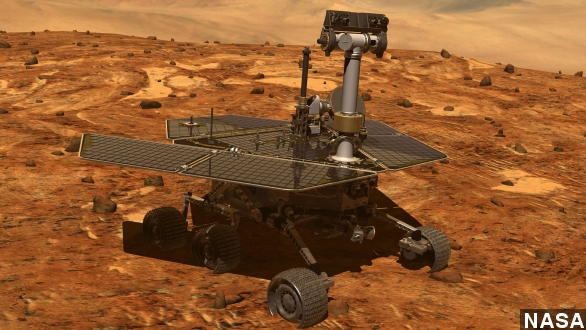 It might've taken 11 years, but NASA's Opportunity finally finished a marathon Tuesday — making the Mars rover the slowest (and the only) manmade machine to do 26.2 miles on another planet. (Video via NASA)

Opportunity was already the distance champion of off-earth vehicles after it beat the 25-mile record of the former Soviet Union's Lunokhod 2 moon rover last year.

Which is pretty impressive, considering it was never meant to be a marathon runner: Opportunity was originally launched in 2004 on a three-month mission. (Video via NASA)

"We went into this, honestly, with big ambitions. We went in this to try to transform our understanding of Mars, and that's hard to do in 90 days. But turns out if you have 10 years you can come pretty close," said Steve Squyres, Mars Exploration Rovers Principal Investigator.

Opportunity's twin rover, Spirit, didn't quite make it as far as Opportunity, but it also shattered every expectation. Spirit drove 4.8 miles, more than 12 times the goal for its mission, before becoming stuck in 2009. It last communicated with Earth five years ago this month. (Video via NASA)

Over the past 26 miles, Opportunity has made a lot of discoveries that it beamed back Earthbound scientists. It found signs that Mars may have been habitable for millions of years, including signs the planet once hosted a watery environment.

To celebrate Opportunity's accomplishment, NASA's rover team at its Jet Propulsion Laboratory is going to run a marathon-length relay at the lab next week. Hopefully it won't take them 11 years to complete it. (Video via NASA)