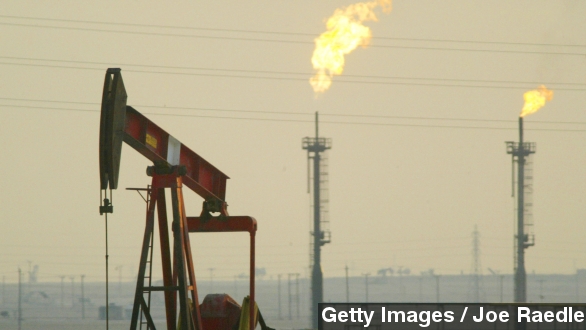 SMS
OPEC Thanksgiving Meeting Could Decide If Cheaper Gas Stays
By Cliff Judy
By Cliff Judy
November 26, 2014
OPEC's Thursday meeting in Austria is already being called the most important in years for the oil cartel amid vast oversupply and falling oil prices
SHOW TRANSCRIPT

OPEC's members plan to sit down together Thursday for some presumably tense talks. If the headlines are to be believed, it's the oil cartel's "most important meeting in years."

The 12 member nations, controlling about a third of the world's oil reserves, will meet in Vienna, Austria, amid four-year lows in the price of oil and wide disagreement on what to do about it. (Video via BBC)

The last 100 days or so have seen a huge oversupply on the market paired with slowing demand, and oil prices responded accordingly, dropping from around $100 a barrel to less than $80 for both WTI crude and Brent crude.

Some of that is attributed to an increase in the U.S. shale oil output through fracking in areas like North Dakota. (Video via Journeyman Pictures)

But in that time, some nations like OPEC's largest contributor Saudi Arabia have also boldly — and to many, surprisingly — kept their oil production steady instead of easing back and letting the supply meet demand to get prices back up.

That's a huge issue for some member nations who rely heavily on oil revenues. The Wall Street Journal published a list of the base price each country would need to balance their fiscal 2014 or 2015 budgets.

CNN notes the Saudis and other Arabian Gulf states like Kuwait and the United Arab Emirates have already built up huge savings reserves, so their incentive to cut production and lose market share just isn't there yet if no one else plans to do so.

"The question is how many people are willing to sacrifice themselves for the price to go up," Fereidun Fesharaki told CNN. Fesharaki is the chairman and founder of Facts Global Energy. "This is too early as yet for OPEC for them to follow. They have to suffer for a period of time before they are good and ready."

And so we have a staring match. Iran's minister of petroleum already indicated he doesn't think that changes soon.

And Saudi Arabia's oil minister essentially confirmed that Wednesday morning, saying his country would not push for a cut in oil production.

Still, some experts believe the market is so saturated right now, even a decision Thursday to cut production wouldn't have a huge effect.

A senior oil market analyst noted the industry is still producing 2 million barrels a day above demand. “Even if OPEC delivers on net production cuts, we don’t think that will be enough." Torbjoern Kjus of DNB ASA said. "We are not talking enough to turn this market around.”