Only One Presidential Candidate Is Reportedly Paying Interns 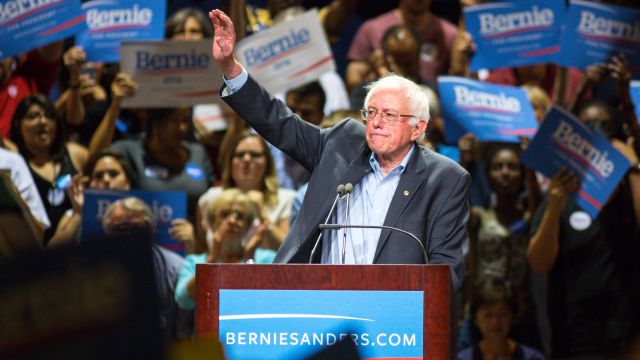 SMS
Only One Presidential Candidate Is Reportedly Paying Interns
By Matt Moreno
By Matt Moreno
February 11, 2016
Of all the candidates running for president, there's apparently only one who gives interns an hourly wage.
SHOW TRANSCRIPT

Campaigning for president is a tireless job, not only for the candidates but also for the interns and volunteers who make it all possible.

But it turns out it's rare for this year's presidential candidates to pay interns.

According to an op-ed in The Washington Post, of all the Democratic and Republican candidates, Bernie Sanders is the only one who's giving his interns an hourly wage.

Interestingly, Sanders reportedly pays them just over $10 an hour as he campaigns for a federal minimum wage of $15 an hour.

"The United States government should not be the largest low-wage employer. It should be the best employer in America," Sanders said at a rally in 2015.

The issue of unpaid internships is especially interesting when it comes to candidates campaigning for higher minimum wages and lower college debt — all while failing to pay their free help.

But why don't more candidates pay their interns? Well, it isn't cheap. Plus, you're also using money that could be spent on ads and other campaign finances that reach wider audiences.

Plus, being an intern for a high-profile political candidate can be prestigious — that's partly why some of the application processes are so extensive.

For example, submitting an internship application to join Marco Rubio's campaign — one of the most extensive — requires a resume, cover letter, references and a series of short-answer questions.

The WaPo op-ed reads: "Whoever wins, the next president will likely follow the pipeline of free labor all the way to the White House, where interns are, of course, unpaid. The issue is truly nonpartisan, as neither the Democratic nor Republican national committee pays its interns."

According to the National Association of Colleges and Employers, the average hourly wage for interns can range from $15 to $23 an hour.

This video includes clips from PBS and Fox Business and images from Getty Images.