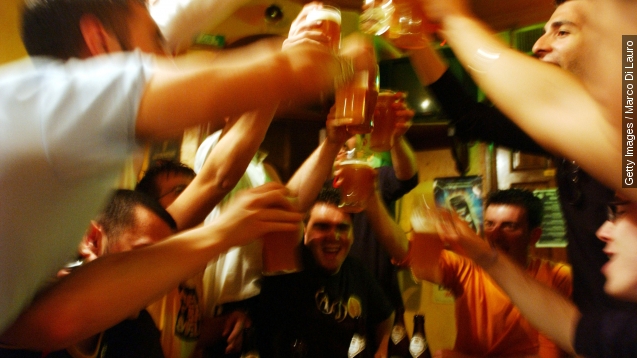 SMS
Only Fratty Humor Could Make Drinking Safely Sound Cool
By Leah Becerra
By Leah Becerra
August 11, 2015
There are other apps to help you find a ride or stop you from drunk dialing your ex, but Drunk Mode's marketing seems to have struck a chord.
SHOW TRANSCRIPT

Drunk Mode sounds like a parent's worst nightmare, but actually the app is promoting safety, and the best part is that people are using it.

With several features designed to help those who go a little overboard stay out of trouble, Drunk Mode's message is simple: "Get Crazy. Stay Safe." And since the app's inception in 2013, creator and CEO Josh Anton says it's garnered some 750,000 downloads.

That's actually a pretty decent number — especially considering apps like these are probably considered lame by the average partier.

But this app's success so far is likely due to targeted marketing like this:

It kind of has a College Humor sort of vibe, which is fitting because that seems like just the sort of thing people who need the app most would respond to.

One TechCrunch writer says, "The mission of the app can feel a bit disjointed at times as it balances promoting typical frattiness and safety." But whatever works, right?

For instance, the app tackles the minor problem of drunk dialing your exes by making you take a sobriety quiz before making a call. And it also addresses the more serious problem of finding yourself stranded or, even worse, tempted to drive drunk with its "Find a Safe Ride Home" feature.

It also helps users track all the places they stumbled with the "Breadcrumbs" mapping feature and helps them find their friends if they get separated from the group.

Thanks to a new partnership with Fabriq Technologies, the app's adding another feature soon that could even be used to combat campus rape. It's called "Panic Button."

Apps like this have surfaced before, but this is the first time one has seen this much use, most likely thanks to clever marketing. And it also doesn't hurt that its new features will be dropping in time for the school year. (Video via Drunk Mode)

This video includes images from Getty Images and A Syn / CC BY SA 2.0.