Only Children Could Have Come Up With This Shark's Name 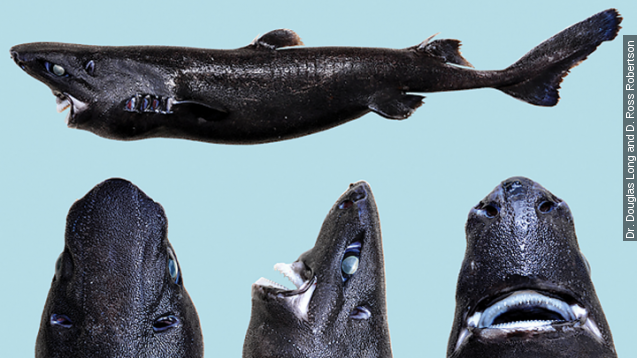 SMS
Only Children Could Have Come Up With This Shark's Name
By Ryan Biek
By Ryan Biek
December 23, 2015
The "ninja lanternshark" emits light to become virtually invisible to predators.
SHOW TRANSCRIPT

This shark can surround itself in a faint light to become virtually invisible. But its most famous attribute? It's nicknamed the "ninja laternshark."

To come up with a nickname, though, the Pacific Shark Research Center's Vicky Vasquez turned to four children ages 8 to 14.

The shark has light-emitting organs in its jet-black skin called photophores, which help it blend in with the faint light from above. This means creatures below the shark will have a hard time seeing its shadow. Hence, the kids chose "ninja lanternshark."

There are other kinds of lanternsharks, but the "ninja" is the first to be discovered in Central American waters. (Video via Discovery)

A lot of our public perception of sharks is based on Great Whites, but, as lanternsharks show, there are plenty of other cool species out there. (Video via Discovery)

One researcher told Hakai Magazine, "About 20 percent of all shark species have been discovered in just the last 10 years."

Someone has to name them, right?