One Of NCAA Football's Best Conferences Will Likely Miss The Playoffs 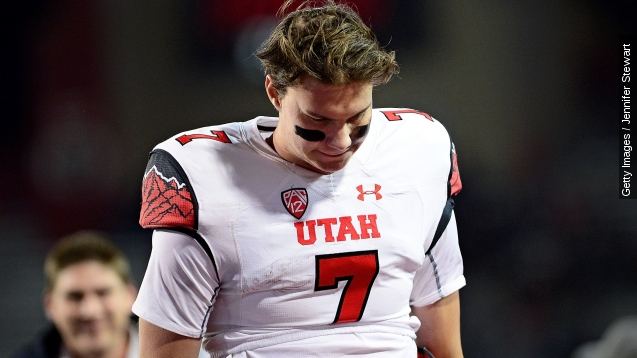 SMS
One Of NCAA Football's Best Conferences Will Likely Miss The Playoffs
By Carter Woodiel
By Carter Woodiel
November 15, 2015
The Pac-12 is one of the best conferences in college football, but here's why its top teams are now almost guaranteed to miss the playoffs.
SHOW TRANSCRIPT

The Pac-12 is widely considered one of the best conferences in all of college football. But with two weeks left in college football’s regular season, they're all but locked out of the sport's four-team playoff.

The demise of the Pac-12's playoff hopes was a tragedy in two acts.

It was the second loss of the season for both teams, likely too many to win the favor of the College Football Playoff Selection Committee, the 12-person panel who determines the playoff bracket. (Video via ESPN)

While that's hard for fans on the West Coast to hear, it was bound to happen to someone. After all, college football has five major conferences, and the playoff has room for only four. Still, it's surprising to see a conference like the Pac-12 get bounced this early.

Just because one Power 5 conference is on the outside looking in doesn't mean the other four conferences are guaranteed to grab a spot in the final four, though. (Video via College Football Playoff)

That’s because of Notre Dame. The Fighting Irish, who don't have any conference affiliation, are fourth in the committee's rankings, with the only loss coming in a nail-biter on the road against top-ranked Clemson. (Video via The Elkhart Truth)

As for which conference Notre Dame could push out of the playoff, the Big 12 seems to be on the shakiest ground. The conference is hurt by not having an end-of-year championship game, something that can often sway the committee toward a particular team. (Video via Big 12)

But let's not get ahead of ourselves. There are still four College Football Playoff rankings left, and the teams in line can change dramatically. It just looks like none of them will hail from the Pac-12.