One Of Brexit's Main Architects Is Stepping Down As Party Leader 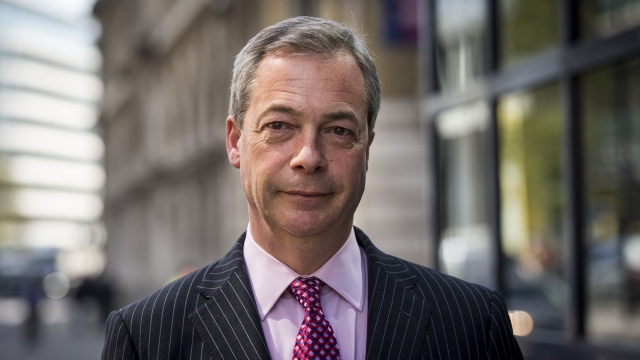 SMS
One Of Brexit's Main Architects Is Stepping Down As Party Leader
By Ryan Biek
By Ryan Biek
July 4, 2016
Nigel Farage has been the leader of the United Kingdom Independence Party for the better part of a decade.
SHOW TRANSCRIPT

Nigel Farage, the leader of the United Kingdom Independence Party and a main architect of Brexit, gave up his post Monday.

He said at a press conference: "I came into politics from business because I believed that this nation should be self-governing. I have never been, and I have never wanted to be, a career politician."

Farage added: "During the referendum campaign, I said I want my country back. What I'm saying today is I want my life back."

UKIP's seen Farage at the helm for the better part of a decade. He resigned briefly in 2015 after losing an election for the House of Commons, but his party refused his resignation.

That's not to say Farage didn't make any rivalries during his tenure. Douglas Carswell tweeted a sunglasses emoji shortly after Farage resigned.

Carswell is the party's only sitting member of the Commons, though he said he won't try to take Farage's place as party leader.

Suzanne Evans, UKIP's parliamentary spokeswoman who's suspended for criticizing the party, told Sky News she would like to stand in for Farage.

Farage is leaving politics at an especially divided time for the U.K. The country decided to leave Europe as he advocated, but the decision only got 52 percent of the vote.

The renegotiation process for the U.K.'s exit isn't even expected to start until September, when the nation's current prime minister will likely step down.

Farage told reporters he'll watch the negotiation process "like a hawk" and possibly comment on it at the European Parliament.

This video includes clips from France 24, RT, LBC, BBC, UKIP MEPs and The Independent and images from Getty Images.