One Of Bill Cosby's Accusers Testifies At Nev. Legislature 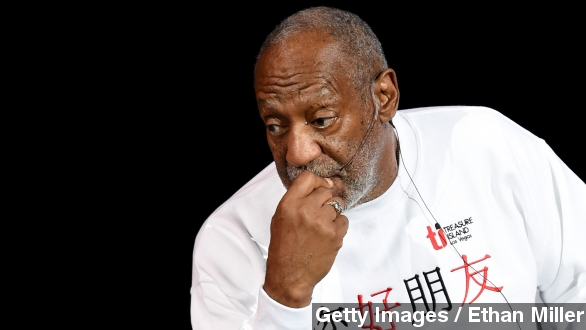 SMS
One Of Bill Cosby's Accusers Testifies At Nev. Legislature
By Cliff Judy
By Cliff Judy
March 14, 2015
One of the women who says Bill Cosby assaulted her asked Nevada lawmakers to remove the statute of limitations to charge suspects with sexual assault.
SHOW TRANSCRIPT

The Nevada state legislature is now considering a bill to remove the statute of limitations for sexual assaults, and it appears to have been inspired at least partially by the allegations several women have made against legendary comedian Bill Cosby.

Currently, Nevada state law says prosecutors must file a case against a suspect within four years of when the alleged crime took place. Assembly Bill No. 212 would remove that limitation.

One of Cosby's accusers who lives in Las Vegas spoke to lawmakers Friday.

"There's no possible way you can understand how long it takes to be able to have courage to say I want to do something about it," Lise-Lotte Lublin told Nevada lawmakers. (Video via KTNV)

That was Lise-Lotte Lublin, one of the women to claim Cosby assaulted her in the late-'80s. She's represented by high-profile attorney Gloria Allred, who has several clients accusing Cosby of assault. (Video via KLAS)

But before you go reading headlines thinking it might be possible for passage of that bill to lead to charges against Cosby, think again.

Both KTNV and KLAS report the bill couldn't be retroactive, so Lublin was essentially speaking out in support of any future victims of sexual assault in Nevada.

Cosby made headlines earlier this week for releasing a video promoting a future standup comedy tour. While more than two dozen women have accused him of assault, he and his attorneys have denied all allegations and Cosby has never been charged with a crime. (Video via ABC)