Bernie Sanders Is Right Of Hillary Clinton On This Issue 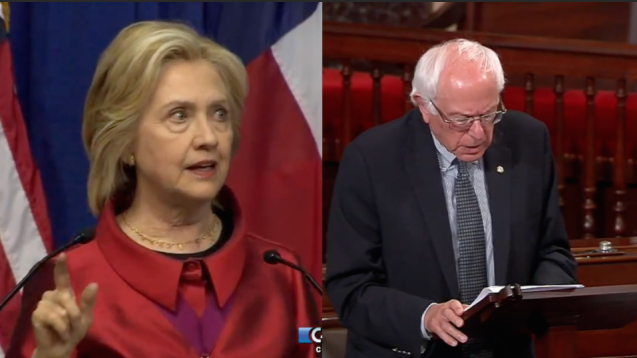 We already know where the GOP candidates stand on gun control. (Videos via CNN and MSNBC)

But where do the Democrats stand? Well, surprisingly, this is one of the few issues were Bernie Sanders has historically been to the right of Hillary Clinton. (Videos via Bernie 2016 and C-SPAN)

Clinton has always been a supporter of strong gun control. She backed a national gun registry in 2000 and has made statements about needing to "rein in" America's gun culture. (Video via Hillary For America)

"What is wrong with us that we cannot stand up to the NRA, and the gun lobby and the gun manufacturers that they represent?" said Clinton.

But Sanders' relationship with gun control is a bit more complicated. He has a history of voting against what some on the left would consider key gun control issues.

Sanders first got elected to the House of Representatives with the help of the National Rifle Association. That’s right, the Democratic Socialist was backed by the NRA.

Since taking office, Sanders has been fairly moderate on gun control. He voted against the 1993 Brady Bill, which requires federal background checks for all gun purchases. (Video via CNN)

In 2005, Sanders voted for a bill that would prevent victims of gun violence from suing gun manufacturers. (Video via Bernie 2016)

Sanders has also backed bills that allow guns in checked bags on Amtrak and blocked funding for aid organizations that would tax or register American guns.

But even with all of that, Sanders has consistently supported bans on assault weapons and high-capacity magazines. Even though he has said, "If you passed the strongest gun control legislation tomorrow, I don't think it will have a profound effect."

Sanders is now having to defend his voting history when it comes to gun control — a topic that is sure to be in the first Democratic debate.

In an interview with MSNBC following the shooting at Umpqua Community College in Oregon it sounded like his opinions on gun control laws had shifted, but Sanders still prefers to keep the focus on social issues. (Video via MSNBC)

Sanders may be to the right of Clinton on gun control, but he's still probably not the NRA's first pick for president. The group gives him a D-minus rating on gun issues.