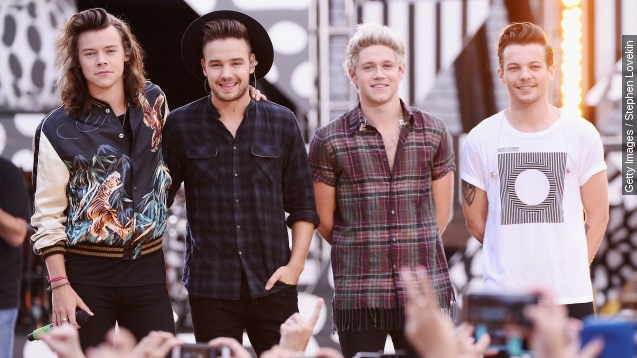 SMS
One Direction Teases Fans With New Track Names
By Cody LaGrow
By Cody LaGrow
October 12, 2015
We are still five weeks away from One Direction's new album, and we're already finding out the names of our new favorite songs we've never heard.
SHOW TRANSCRIPT

One Direction is Snapchatting on a Segway to promote its new album, making us ask, when is it enough already?

Niall's never been more right. Never enough. 1D released the full track listing for "Made In The A.M." on Snapchat, and it looks like we're promised 17 songs from the boy band's farewell album. The band is set to go on an extended hiatus in March.

So we should enjoy their antics together while we can. They're giving us a lot to work with.

Our faves from across the pond made us laugh last week in the midst of their sold-out tour when Harry Styles stopped a concert for four minutes in order to hear the name of the 7-year-old he wanted to wish a happy birthday. (Video via Sony Music Entertainment / One Direction)

Nice to know they're still smiling after Apple Music accidentally leaked the name of their next single, "Perfect." Fans will get to hear that song first thing on Friday, which means we get a further sampling of what they've been teasing us with since August. (Video via Sony Music Entertainment / One Direction)

"It's all quite different. There's a couple nice, slow, sort of usual One Direction songs on there. But we've taken a lot of inspiration from, like, older artists, I guess, which is like the Police feel on 'Drag Me Down,'" explained Liam Payne on ABC's "Good Morning America" in August.

The band's first single release from the new album, "Drag Me Down," shattered Spotify records for one-day streams — it played 4.75 million times by 1.2 million One Direction fans worldwide.

One Direction's album is set for release Nov. 13, going head-to-head with Justin Bieber's album release date. It's sure to be a hair-flipping pretty-boy battle you better wear your skinny jeans for.