On World Refugee Day, A Bleak Outlook Amid Calls For Help 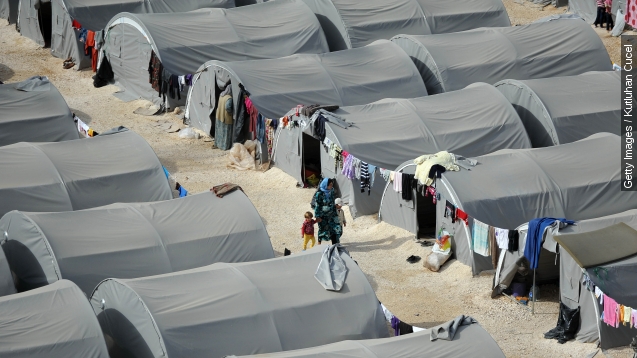 SMS
On World Refugee Day, A Bleak Outlook Amid Calls For Help
By Cliff Judy
By Cliff Judy
June 20, 2015
At a time when the number of people displaced by war and persecution worldwide is at an all-time high, the U.N. is calling out developed countries.
SHOW TRANSCRIPT

The U.N. says developed countries need to do more for refugees. (Video via United Nations High Commissioner for Refugees)

Saturday marks World Refugee Day at a time when the issue is more dire and seemingly further from sustainable solutions than ever before. The United Nations recently released figures on the record number of people displaced by war and persecution worldwide.

"More and more of the people that are suffering have no chance to get protection," UNHCR's Antonio Guterres said.

That was the somewhat subtle call from the UN's high commissioner for refugees Antonio Guterres asking developed nations for help. In a statement on World Refugee Day Saturday, he left subtlety behind.

"Even as this tragedy unfolds, some of the countries most able to help are shutting their gates to people seeking asylum. Borders are closing, pushbacks are increasing, and hostility is rising," Guterres wrote.

The reason refugee agencies are so bold now in calling out the same countries they want help from isn't just because of the dire world situation. It's because poorer countries host the vast majority of these displaced people.

The United Nations estimates developing countries host 86 percent of the world's refugees. In a post-9/11 world, the United States doesn't accept nearly as many refugees from the Middle East as in the past. (Video via United Nations Relief and Works Agency)

For instance, the U.S. has accepted fewer than 1,000 refugees from Syria since war broke out in 2011, though a federal official says that number should increase significantly soon and the U.S. has issued massive foreign aid, especially to Syria.

"What concerns me is we need the rest of the world to do more in terms of providing assistance, and we need fewer crises," Anne Richard said. Richard is the U.S. assistant secretary of state for population, refugees and migration.

That seems unlikely anytime soon as conflicts from Ukraine to Syria to Sudan and more displace civilians — forcing them to seek help, regardless of whether those offering to help have the resources to support them. (Video via United Nations High Commissioner for Refugees)