On The Anniversary Of Tiananmen Square, China Scrubs Away Its History 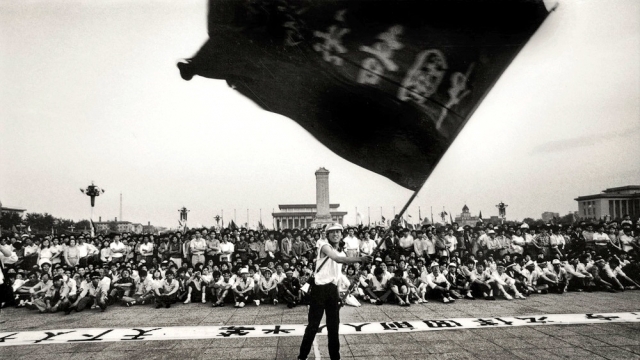 Almost 30 years after a violent crackdown on pro-democracy demonstrators, China's government still doesn't stand for public discussion — or even mention — of the Tiananmen Square protests.

"In China, the will of the people has been thwarted by the will of The People's Government," reported Peter Jennings.

In 1989, 400 cities across China saw protests against totalitarian Communist rule, and, by June 4, party leaders had had enough. An estimated 300,000 soldiers broke up Beijing's protests by force, firing semi-automatic weapons into crowds and running down protesters in tanks.

The images broadcast from China prompted international criticism. China's Red Cross said 2,600 had been killed, but even today, the nation's government has not released an official death toll.

In fact, China's leaders have gone silent about the incident altogether. And they expect China's citizens to do the same — especially online.

Each year, days before the protests' anniversary, reports out of China say Communist Party censors are cracking down on information about the massacre.

On China's favorite microblogging site, Weibo, even terms as general as "June 4" are being deleted by censors. And a lot of Western sites like Google and Facebook are already completely blocked.

China's government has done the same thing year after year on this date. But what's surprising is that the party seems to try harder every year to scrub away at its history.

Mothers whose sons and daughters died in the Tiananmen Square protests have made digging for government answers their sole mission. They say they continue to experience government surveillance and even detentions.

"Such a great, mighty and correct party is afraid of a little old lady. It shows how powerful we are, this group of old people, because we represent righteousness," Zhang Xianling told NPR.

The Tiananmen Mothers say they want three things from the Chinese government: truth, accountability and compensation. But nearly 30 years later, they're still waiting for acknowledgment.