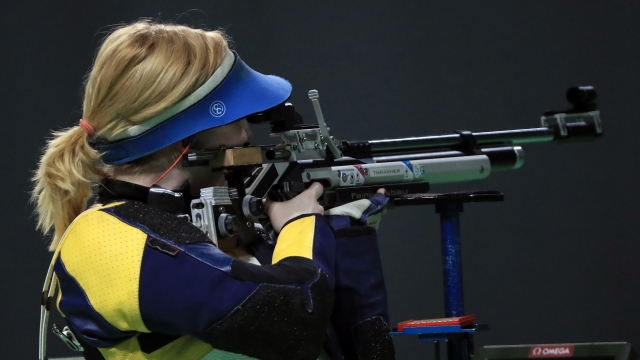 America has something to celebrate: We're already kicking butt in the Olympics.

OK, so it's just one gold medal in one event, and we're tied for second overall right now, but everything matters in the Games. Badass shooter 19-year-old Ginny Thrasher beat out two veteran shooters to take home the top spot Saturday. She was the first American to bring home the gold.

SEE MORE: Top 3 Olympic Storylines You Have To Watch

This is Thrasher's first Olympics, but she's no stranger to carrying a team. During her freshman year in college, she led West Virginia University to an NCAA team rifle championship while winning her own individual events.

But Thrasher's comments didn't stop there. She also took on the fight over gun control laws and how they impact her sport, saying, "Some of the (controversy surrounding) gun laws in America is just distracting from our sport, which is very different."

As Congress fights over gun restrictions, shooting sports have been been caught in the crossfire. And Thrasher's not the only rifle Olympian speaking out. Her teammate, Kim Rhode, has been even more outspoken for years.

Her current issue centers around new gun control measures in California that, among other things, added background checks for ammunition. Rhode told press, "I shoot 500 to 1,000 rounds a day, having to do a background check every time I purchase ammo or when I bring ammo out for a competition or a match — those are very, very challenging for me."

Rhode also says the conversation about gun safety makes it harder for shooters to get endorsements and sponsorships, which is where the serious money is for Olympic athletes.