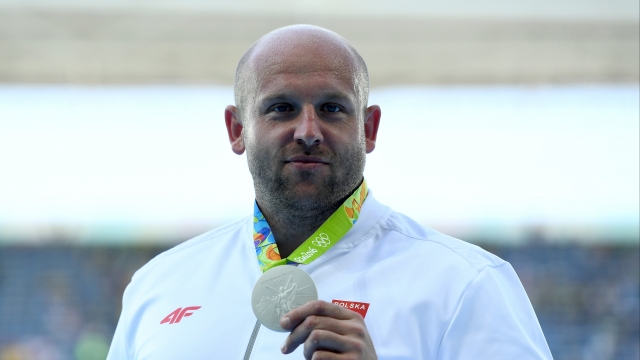 SMS
Olympic Discus Thrower Auctions His Silver Medal For A Boy With Cancer
By Lindsey Pulse
By Lindsey Pulse
August 27, 2016
The boy's surgery will reportedly cost about $126,000.
SHOW TRANSCRIPT

An Olympic discus thrower has auctioned off his winning medal to raise money for a child's cancer treatment.

Poland's Piotr Malachowski won silver at the Olympics this month. After his win, Malachowski auctioned off his medal on eBay to the highest bidder.

Malachowski says the mother of a 3-year-old boy named Olek wrote to him asking for help so her son, who has retinoblastoma, can get treatment.

Retinoblastoma is a form of malignant eye cancer that primarily affects children under 5 years old. It can affect one or both eyes and can be hereditary.

Reports say the total cost of Olek's surgery is $126,000, and Malachowski says the treatment can only be done in New York.

He told his followers on Facebook about the Olek last week in hopes of raising funds for the boy's treatment. The discus thrower took silver in both the 2008 and 2016 Olympic games.

According to ESPN, the medal auction had raised around $19,000 when it ended on Tuesday.

The discus thrower says the funds he gets from the the auction will go directly to Olek's treatment. The Olympian wrote: "In Rio I fought for gold. Today, I appeal to all — let's fight together for something that is even more valuable. The health of this fantastic boy."

Malachowski isn't the only Olympian to auction off his medal for a cause. U.S. swimmer Anthony Ervin sold his to bolster aid relief efforts after the 2004 Indian Ocean tsunami. And famed Ukrainian boxer Wladimir Klitschko sold his medal from the 1996 Atlanta Olympics for more than $1 million as part of a fundraising event for his children's charity.

Olek also has a page on the Polish charity site SiePomaga. As of Saturday morning, more than 12,000 people donated to the cause.