Olivia Munn Shuts Down Engagement Rumors With A Hilarious Impression 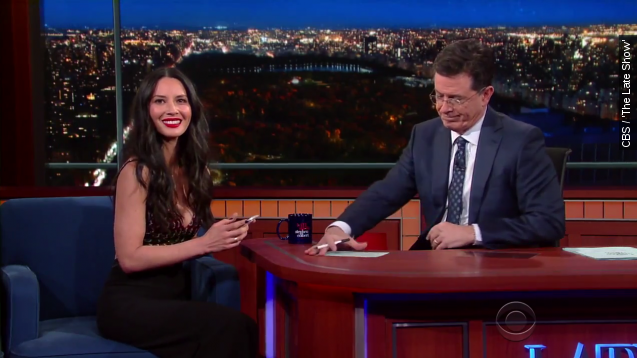 Despite several reports out earlier this week, Olivia Munn is definitely not engaged to boyfriend Aaron Rodgers.

But the actress told Stephen Colbert her mom totally believed the rumors.

"This is a text from my mom from just the other day. 'Oh man, you engagement? You know we love Aaron. I pray say thanks for him all the times. I bet Chance happy! Hey, why don't you tell me first?' Smiley face," Munn read from her phone on "The Late Show."

And Mama Munn wasn't the only family member who thought she heard wedding bells.

The "Ride Along 2" star says she got bombarded by emails from random relatives asking if they could come to the wedding. Yeesh. (Video via Universal Pictures / "Ride Along 2")

Well, we're glad she has a sense of humor about the whole thing. But we secretly wish they would just get hitched already.

After all, they are easily one of the most adorable couples in Hollywood, amirite?