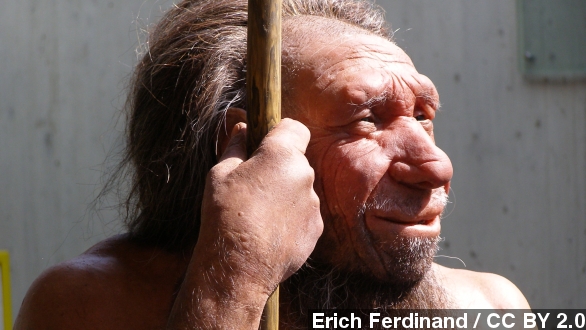 By Lauren Zima
October 23, 2014
A 45,000-year-old thighbone is showing when humans and neanderthals may have first interbred and revealing details about our origins.
SHOW TRANSCRIPT

Look, we can't play it any other way, this story is about sex. And science.

Scientists are trying to figure out more about our origins — including when humans and Neanderthals first mated. And a team just released their findings on a thighbone discovered in Siberia in 2008.  (Video via BBC)

They determined it's a man's bone, and it's about 45,000 years old. It's the oldest human bone ever sequenced.

The researchers spoke with LiveScience, which reports the man, "carried a similar level of Neanderthal ancestry as present-day Eurasians. Their research suggests Neanderthal genes flowed into the ancestors of this man 7,000 to 13,000 years before he lived."

That means humans and Neanderthals could have first interbred about 50-60,000 years ago, giving this man, and many modern-day humans, Neanderthal DNA. (Video via Natural History Museum)

Fifty to 60,000 years ago is also around the time that, according to findings released in 2012, a group of humans migrated out of Africa.

Because the bone was found in Siberia, it suggests that early humans migrated from Africa into the Middle East through other routes than previously thought. We used to think they had only taken Southern routes.

Before this bone was analyzed, the oldest human bone ever genome sequenced was 24,000 years old. So, this about twice as old, and it's giving scientists a lot to think about. Including sex.