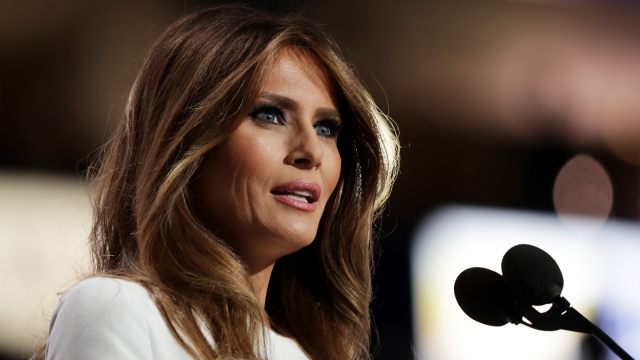 The New York Post says this is Melania Trump like we've never seen her before. They're right.

The Post ran a cover on Sunday with the headline "The Ogle Office." It also featured several nude photos reportedly taken of Melania Trump during a 1995 photo shoot.

The cover has certainly gotten a lot of attention since the paper tweeted it out Saturday night, but it also brings into question how the media should cover family members of presidential candidates.

Melania Trump has largely stayed out of the campaign limelight until her speech at the Republican National Convention in mid-July.

"I like to keep life as normal as possible for my son, Barron," she told MSNBC in February.

But she's not alone. This latest incident is far from the first time a political candidate's spouse or family member has been dragged into a political scandal — even during this year.

Her husband's primary opponent, Ted Cruz, saw his wife, Heidi Cruz, dragged into the press — by Donald Trump himself. He retweeted a meme of Heidi Cruz and Melania Trump, saying, "A picture is worth a thousand words." It showed a glamorous photo of his wife and a less flattering one of Cruz's.

SEE MORE: Here's What Ted Cruz Said About Not Endorsing Trump At The RNC

Children of politicians have also been dragged into the press. During the 2000 presidential campaign in South Carolina, rumors swirled that John McCain had an affair and had an African-American child out of wedlock. In reality, one of his daughters was adopted from Bangladesh.

In 1992, Chelsea Clinton was the target of a "Saturday Night Live" Wayne's World sketch, comparing the then-12-year-old's looks to those of Al Gore's daughters. Then, Rush Limbaugh compared Clinton's appearance to that of a dog.

And the Bush twins also had their fair share of bad press when they were in college.

"Only I have my story. I know the truth. I have a thick skin," she said in an interview with Fox News in March.