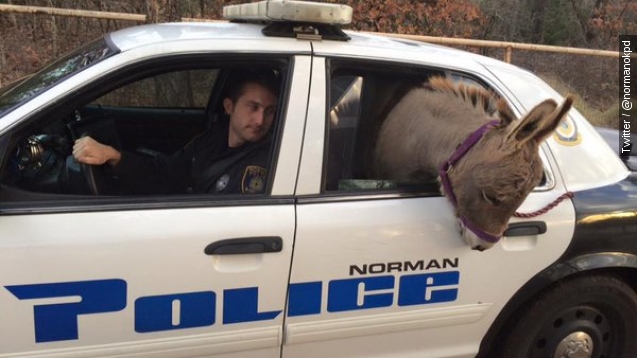 SMS
Oklahoma Police Officer Lets Lost Donkey Hitch A Ride In His Car
By Samantha Crook
By Samantha Crook
December 2, 2015
An Oklahoma police officer got a call about a lost donkey wandering in the street. So he decided to let the little guy ride with him to safety.
SHOW TRANSCRIPT

Emergency responders have been credited with recovering lost family pets for as long as we can remember. But a police officer saving a lost donkey? That's a new one.

KOKH reports officer Kyle Canaan arrived on the scene in Norman, Oklahoma, Tuesday morning after a concerned citizen noticed a donkey wandering in the road in a 50 mph zone.

Of course, officer Canaan's first concern was making the road safe for humans. But he was still considerate of the donkey's needs along the way — he let the little guy ride in the back seat of his police cruiser to get him to safety.

He even opened the window for the donkey, whose nickname is Squishy. (Video via KOCO)

"I didn't know if it wanted to put its head out the window or not. I don't know. I don't deal with donkeys too often," Canaan said.

With the help of the the woman who originally spotted the donkey, Robin Strader, the donkey made it to her property safely.

And if someone doesn't claim the donkey as their own, Strader says she's ready to adopt. Gotta love a happy ending.