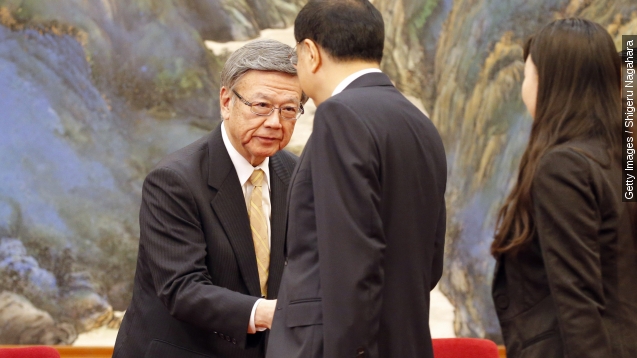 The governor of Okinawa is on what's essentially a one-man campaign against the U.S. military, the Japanese government and the White House to stop the construction of a new military base on his island.

Gov. Takeshi Onaga has the overwhelming backing of the Okinawan people, who in November voted him into office in a landslide on an agenda primarily focused on stopping the base. (Video via Asahi Shimbun)

Marine Corps Air Station Futenma, in the city of Ginowan, is located in a densely populated area, but some 80 percent of the island's 1.4 million inhabitants have signaled they're against the plan to move it to Henoko Bay. (Video via Al Jazeera, RT)

So Onaga has taken it upon himself to travel to the U.S. looking for support against the base, despite the fact that he has pretty limited power to stop the base himself. (Video via Foreign Correspondents' Club of Japan)

That's because Japan's Prime Minister Shinzo Abe, who's been pushing for more military collaboration between Japan and the U.S., has steadfastly supported U.S. bases. (Video via The White House)

So what can Onaga really achieve? Well, he's already brought a lot of attention to his cause and even some congressional support.

On a visit to Hawaii last week, Onaga said he'd gotten Hawaii Sen. Brian Schatz's backing to stop the Henoko base, and now Onaga's on his way to D.C. (Video via NHK)

But, as The Washington Post reports, "Onaga said he is waiting to hear back from the State and Defense departments on his requests to meet the relevant assistant secretaries, but analysts say it is unlikely he will meet anyone more senior than a desk officer."

For its part, the Pentagon has publicly aimed to reduce the impact of its bases in Okinawa, although the construction of the Henoko base would involve reclaiming land in the bay, which environmentalists say would threaten Japan's last dugong population. (Video via Stars and Stripes, Greenpeace)

Still, the anger over Henoko has less to do with the dugongs, and more with the sentiment that Okinawans carry a disproportionate amount of the U.S. military burden.

Around two thirds of the military's bases in Japan are based on Okinawa, despite the fact the island makes up just six-tenths of 1 percent of Japan's total area.

Incidents of sexual assault, drunk driving and helicopter crashes associated with the bases have raised animosity among Okinawans for decades.

Onaga's tour of the U.S. is scheduled to end Thursday.