Oil Industry Layoffs Are Here, And They Could Get Worse 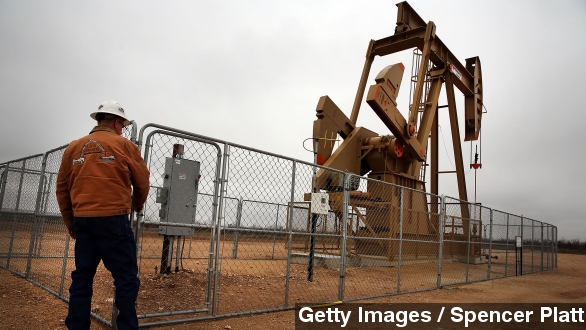 Ever since oil prices started plummeting last year, drivers have been cheering while industry experts warned of looming job cuts. Now, it seems those cuts are here. (Video via Voice of America)

Halliburton, Shell and a host of other companies are already beginning to lay off workers.

A Bloomberg report from last month said global layoffs in the oil industry had broken 100,000.

The cuts come from the fact that as oil gets cheaper, more and more oil wells become unprofitable to operate. The price per barrel has spent most of 2015 under $60, and analysts are starting to predict greater job losses on the horizon.

Chris Faulkner, CEO of Breitling Energy Corp., told CNN: "It's not just about the guys on the rigs. It's about 9 million Americans who are supported directly and indirectly by our industry. You've got hospital workers, you've got health care, you've got folks at hotels and restaurants."

What's interesting, though, is that despite both global and domestic job cuts, U.S. production keeps growing, in part because U.S. drilling techniques are becoming more efficient. But there's nowhere for it to go: By law, U.S. companies can't export their surplus crude. (Video via Voice of America)

Senate Republicans have put forward a plan to end the decades-old export ban, but in the meantime, U.S. stockpiles continue to grow. Former Federal Reserve chairman Alan Greenspan told Bloomberg oil companies will have to cut production soon, and that's when the real job cuts will kick in.

"The capacity to basically build oil expansion remains there, and frankly I had expected it to turn down or ease a couple of weeks ago," Greenspan said.

Experts continue to be divided over oil's fate, with some saying the price has bottomed out while others predict it could slide to $20 a barrel.