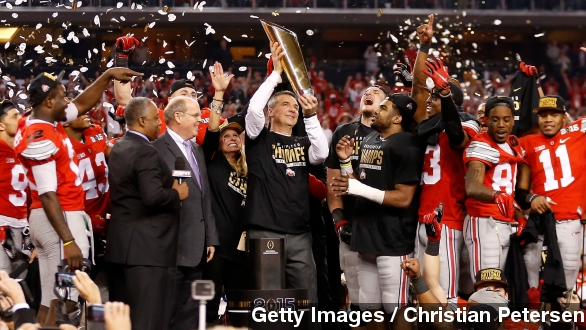 With the help of a strong ground attack, the Buckeyes beat the Ducks 42-20.

Ohio State running back Ezekiel Elliott pretty much couldn't be stopped. Elliot plowed through Oregon's defense. He rushed for a career-high 246 yards while nabbing four touchdowns.

The Buckeyes victory came in light of four turnovers, a season-high.

But Heisman Trophy winner Marcus Mariota, for the most part, couldn't capitalize and was contained by Ohio State's defense.

Mariota put up more than 300 passing yards with a pair of touchdowns, but it wasn't enough to fly past Ohio State's high-powered running game.

Ohio State came into the national championship as the number four seed. In prior years, the Buckeyes wouldn't have had the chance to play in Monday night's final. So, with their victory, supporters of the inaugural College Football Playoff are bound to argue this is pretty solid proof the new system works.

Plus, the excitement surrounding the event is already almost Super Bowl-like. Both semi-final matches pulled in the strongest ratings in cable TV history. The national championship is likely to surpass that.

"I like Ohio State."
And, the hype has even affected the gambling world. ESPN says more people were on pace to bet on Monday night's showdown than any other college football championship game ever.

As for Ohio State, it's fair to say the team does a good job holding on to big leads.

According to USA Today, the Buckeyes are "91-1 when leading by 14 or more points at any time in a game in the last 10 seasons."

This video includes images from Getty Images and audio from Pierlo / CC BY 3.0.