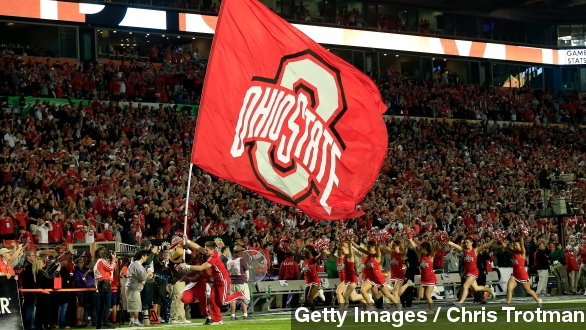 SMS
Ohio State Player's Suicide Is Part Of Troubling Trend
By Matt Moreno
By Matt Moreno
December 3, 2014
After the death of Ohio State football player Kosta Karageorge, many are asking questions about the effects of head trauma on players.
SHOW TRANSCRIPT

A neuropathologist will be looking for signs of traumatic brain injury in the football player and wrestler who died of an apparent self-inflicted gunshot wound last week.

The examination for brain injuries is not normally part of the autopsy process, but Karageorge reportedly had a history of concussions.

"His mother was concerned by his last text message, 'I'm sorry if I'm an embarrassment, but these concussions have my head all *****ed up,'" WEWS reports.

Karageorge's body was found by police Sunday in a dumpster near his apartment. He reportedly had a gunshot wound, and the gun was found in the dumpster. Police suspect the wound was self-inflicted.

But the tragic end to Karageorge's life reflects a troubling trend among football players with a history of head trauma.

"One of the best NFL players of his generation has died. Junior Seau apparently committed suicide today," CBC reports.

"Tragedy in Kansas City. Chiefs linebacker Jovan Belcher fatally shooting his girlfriend and then taking his own life," ABC reports.

Now, it's important to note it's too early to tell whether concussions were the driving force behind Karageorge's death. Still, both the NFL and NCAA have battled in court over concussions in recent years.

The NCAA, in particular, agreed to provide "$70 million for concussion testing and diagnosis of current and former NCAA student-athletes." That settlement, however, doesn't provide money to players or their families.

The NFL's uncapped settlement, on the other hand, provides payouts to players and their families, as well as funding medical research and education.

Karageorge's sister says he was cared for properly while at Ohio State, telling The Columbus Dispatch: "Every time he's had a concussion, he's been evaluated and listened to his trainers. He's been properly taken care of by OSU the entire time he's been an athlete for them."

Karageorge's family released a statement Wednesday thanking everyone who helped search for him and calling him a beloved son, brother and more.