Ohio St. Coach&#039;s BCS Argument Comes Back To Haunt Him 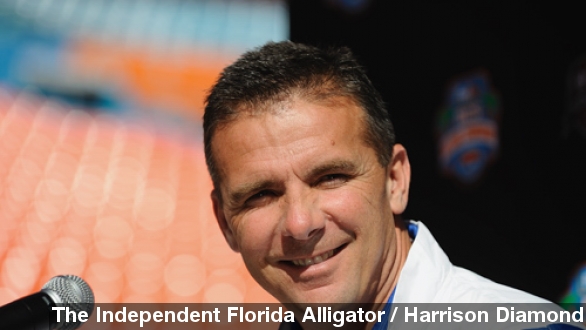 By Matt Moreno
December 3, 2013
Urban Meyer argued in 2006 that his one-loss Gators should jump undefeated Ohio State to play in the title game. Now the shoe is on the other foot.
SHOW TRANSCRIPT

In 2006, before taking over at Ohio State, Urban Meyer argued his then fourth-ranked, one-loss Florida Gators should jump over Ohio State, USC, and Michigan to play in the title game because those teams didn't have as tough a schedule. (Via The Cleveland Plain Dealer)

He said, "We're going to tell a group of young men, who just went 12-1 in a most difficult schedule against six ranked opponents, that they don't have a chance to play for a national championship? I'm going to need help with that one." (Via ESPN)

Now, Meyer might want to back away from that.

Meyer is the head coach of undefeated Ohio State who has only defeated two ranked opponents thus far and nearly dropped to unranked Michigan over the weekend. They'll need to defeat 10th ranked Michigan State this weekend to stay undefeated. (Via WXYZ)

Well, Auburn and Missouri of course. Both have already played five ranked opponents so far, both defeating four of them. Their matchup in the SEC title game will be the sixth ranked matchup between the two opponents. (Via  KOMU)

A writer for USA Today's "For The Win" argues the SEC schools have a case. "​Auburn and Mizzou have played brutal schedules. Their sole losses came against two elite teams that would each bury Ohio State."

But, a Fox Sports writer says don't get ahead of yourself. "... it's never — ever — going to happen. As long as Florida State and Ohio State are in the top two in both human polls, that's it. It's over."

In 2006, Urban Meyer and the Florida Gators DID make the National Championship game and demolished previously undefeated Ohio State 41-14.