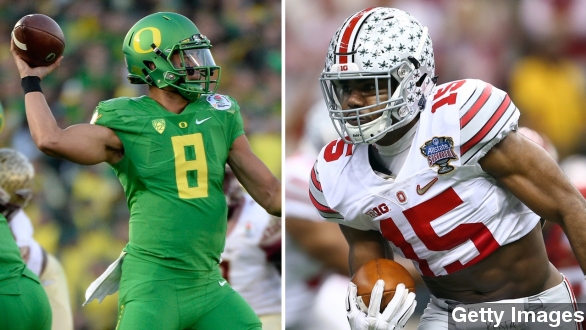 The College Football Playoff National Championship between the Oregon Ducks and the Ohio State Buckeyes is just days away and people all across the country are busy preparing for it. So what are some of the strangest things being done in preparation for the big game? We’ve got you covered.

First up, the uniforms have been unveiled. Ohio State is obviously in red. While Oregon is going to be playing in all-white.

Seriously, white? That’s not even one of the school’s colors.

Will anyone who has been cut off from civilization in the past few weeks and just happens to turn on the television that night even recognize Oregon as one of the two teams?

This is a bizarre move for the school, who has such close ties to Nike it receives new football uniforms for every single game they play each year.

There were many who weren’t too thrilled with the choice, like Cindy Boren of The Washington Post who said Oregon’s absence of color in its uniform sucked all the fun out of them.

On the flip side, John Canzano from OregonLive reminded us the uniforms have nothing to do with how well the team will play on the big night.

Leave it to the football teams to make the biggest fashion statement of the night.

Next, in honor of the Buckeyes making it to the championship, several cities and districts in Ohio have decided to change their names temporarily.

To celebrate head coach Urban Meyer, the city of Urbana is deleting that last “A” from its name.

And apparently if you want to go out at night in Dayton, Ohio, you head to what’s known as the Oregon Historic District. Which is understandably a little problematic in this situation.

The Dayton Business Journal said the town’s mayor decided to rename it “The Buckeye District.”

In its defense, the Oregon Historic District was founded during the early 1830s. Oregon wasn’t even granted statehood until 1859.

So, really, Oregon the state is just a big ol’ copy-cat.

Finally, a Change.org petition was started to get the town of Oregon, Ohio to change its name to Buckeye Town.

The mayor decided to expand on that new moniker a bit.

Good luck putting that on a t-shirt. Seriously, how is anyone even going to remember that mouthful?

And finally, predicting the big winner of the game has gone to the dogs.

In a totally scientific approach, Jimmy Fallon looked to his panel of puppies to choose the winning team.

“There’s a 5 percent chance that this will be correct. … He’s urinating in the bowl. What does that mean? … We have two puppies; that means we have a winner: Oregon will win,” Jimmy Fallon said.

The pups actually have a pretty good track record with their predictions.

Time pointed out they correctly chose “Argo” as the winner of best picture at the 2013 Oscars and the Baltimore Ravens as the winners of the 2012 Super Bowl.

This video includes images from Getty Images and music from Kevin MacLeod / CC BY 3.0 and Pierlo / CC BY 3.0.