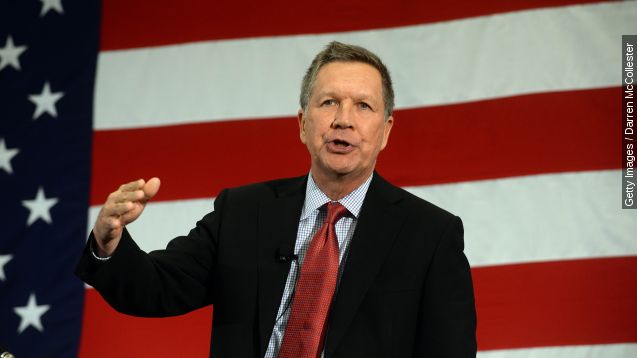 “I have decided to run for president of the United States,” Ohio Gov. John Kasich said.

And then there were 16. Ohio’s John Kasich has officially jumped in the race.

The 63-year-old is betting on a resume that includes nearly two decades in Congress and two terms as the governor of a critical swing state. (Video via Republican National Committee, Office of Ohio Governor John Kasich)

And in case you weren't convinced just how crucial Ohio is, no Republican has ever won the White House without carrying Ohio.

Prior to becoming Ohio’s governor, as chairman of the House Budget Committee, Kasich led the charge to balance the federal budget. (Video via YouTube / Jim Heath)

Today, the former congressman fashions himself as a Washington outsider.

"All I hear is fighting. You know what? People don’t want fighting all the time. They want people to agree and move our country forward," Kasich said on Fox News.

Kasich is often described as a moderate.

Having angered many conservatives with his support for the Common Core and his expansion of Medicaid under the president's health care law.

The question now is: Will that keep him off the Fox News debate stage in August? (Video via Kasich Taylor for Ohio)

Only the top 10 polling candidates will get invites. Right now, it doesn't look like he'll be one of them.