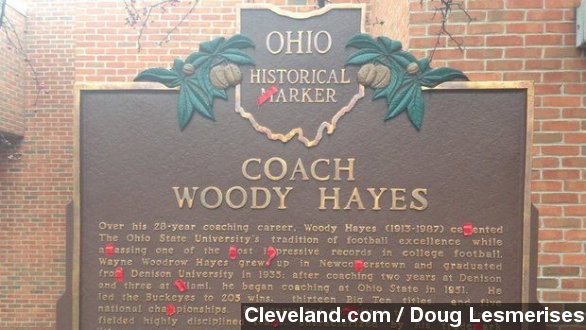 There are college athletics rivalries, then there's the bad blood perpetually brewing between Ohio State University and the University of Michigan. With the No. 3-ranked Buckeyes facing off against the Wolverines Saturday, Ohio's governor decided to, well, enhance the rivalry experience.

"Ohio's Gov. John Kasich went so far as to recognize Saturday as 'Scarlet Letter Saturday' and is encouraging everyone in Ohio to avoid using the letter 'M.'" (Via ESPN)

If you thought Kasich was just poking the fire, think again. He practically doused the rivalry flame with gasoline in the form of this official-looking resolution. (Via YouTube / Governor John Kasich)

It reads, in part: "Whereas, in the only instance in American history when two states went to war with each other, the state beginning with the letter 'M' lost ... We ... do hereby recognize Saturday, November 30, 2013 as SCARLET LETTER SATURDAY." As you can see, all three "M"s in that excerpt are highlighted in red and crossed out. (Via Twitter / @JohnKasich)

Surely, nobody is going to, I don't know, use red tape to cross out "M"s all over the Ohio State campus for a rivalry game. Wait ... they actually did that? Oh.

Buckeyes fans are taking this pretty seriously. Several pictures popped up online of taped-up signs all over OSU's campus. A Cleveland.com writer says Kasich's resolution coincides with a practice that already exists, but it shows the resolve and discipline of Ohioans to follow along with the challenge. (Via Twitter / @JordanStrack, Twitter / @johnnykaneKMBC)

Just ask Ohio State Football head coach Urban Meyer. His wife, Shelley, tweeted this picture earlier in the week after she heard Coach Meyer saying a so-called "bad word." You know the rules, Coach: No "M"s and certainly no utterance of "Michigan." (Via Twitter / @spinnershells)

Saturday's meeting will be the 110th for the two schools, whose rivalry dates back to the 19th century. This game will be big — as it always is — but a USA Today writers argues that an upcoming matchup with another Michigan school might be even bigger.

"Welcome to the crazy money era of conference expansion and the college football playoff. ... If the Buckeyes beat the Wolverines, their national championship hopes will be on the line in Indianapolis against the [Michigan State] Spartans. Even if Michigan pulls the upset, Ohio State will be playing Michigan State for a Rose Bowl berth."

Ohio State is looking to extend their record to 12-0 and put itself in a position to play in the BCS championship game. Michigan is looking for its eighth win and good bowl position. The two teams kick off at 11 a.m. Central Time in Ann Arbor.