Oh Snap! 2015 Teen Choice Will Have A Selfie Taker Award 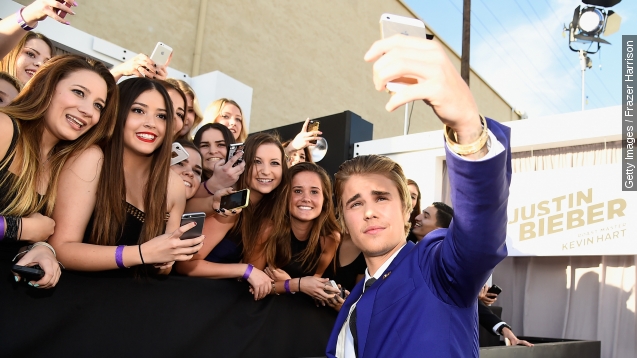 Selfies are continuing to pop up everywhere you look these days. And now, they’ve even got their own award show category.

The Teen Choice Awards announced their second round of 2015 nominations with new categories, and “Choice Selfie Taker” is among them.

So, who are the nominees?

First, Kim Kardashian West. Ah, of course, the selfie queen herself. A no-brainer considering she teaches others how to take the perfect selfie. (Video via T-Mobile)

"Show me how to do it, you are obviously the expert."

And she even published a book of her selfies, titled “Selfish.” Creative. (Video via ABC / "Jimmy Kimmel Live")

But Kim might have some serious competition … her sister Kylie Jenner.

"I really feel like Kim is cramping my style." (Video via E! / "Keeping Up With the Kardashians")

The next nominee has us confused: One Direction. Are bands even allowed to be nominated? Do they take selfies as a group?! Is it even a “selfie” if there are more than one “selfs?” (Video via Sony Music Entertainment / One Direction)

Well, this is the only selfie we could find on the band's official Instagram page with all of the members in the photo. Hmm, award-worthy?

But to be fair, we did find a couple selfies of the band on Liam’s and Niall's Instagram accounts. Maybe this one will sway your vote?

But let’s not count out Rihanna and Nicole Scherzinger.

RiRi’s selfie game is on point whether she is “fishing,” saying “aloha,” wearing purple lipstick or trying out filters.

And Nicole brings glamour to her selfies, keeping it simple — even when she’s wearing her “Cats” costume.

To vote for your favorite selfie-taker and check out other not-so-strange categories, go to teenchoice.com.