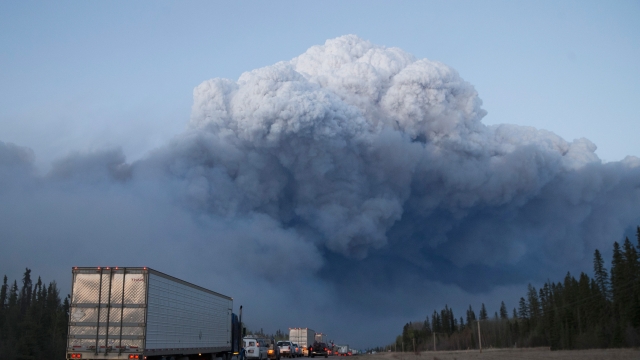 Canadian officials say the massive Fort McMurray fire in Alberta could be doubling in size. So far, the blaze has burned at least 385,000 acres and forced nearly 90,000 people to evacuate.

Some of those evacuees had to move again from camps Saturday as wind and dry conditions helped the fire grow. At a media briefing, a firefighter spokesman said, "Unless we have a significant rain event of 100 millimeters of rain, we expect to be out fighting the fire in the forested area for months to come."

The Alberta government told press more than 500 firefighters, 15 helicopters and 14 air tankers have been deployed to help fight the fire.

As the fire continues to move and grow, the government is looking ahead at rebuilding the area and helping the folks affected. The Canadian Red Cross has raised at least $44 million and Canada's Prime Minister Justin Trudeau says the government will match any individual donations until May 31 without a cap.

So far, no deaths have been reported.