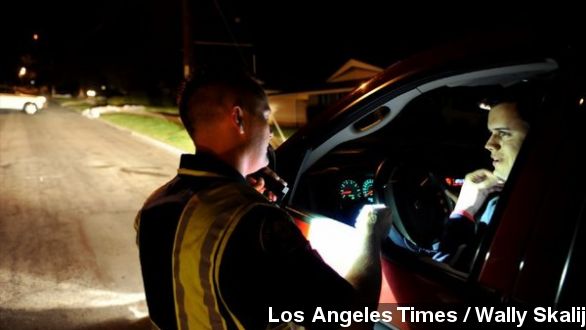 SMS
Officials Order Evacuation Of 1,000 Calif. Homes
By Collin Ruane
By Collin Ruane
February 28, 2014
Heavy rain pounded Southern California Friday, and officials have ordered evacuations for about 1,000 homes that could be hit by mudslides.
SHOW TRANSCRIPT

KTTV reports the evacuation notice was sent out around noon Thursday for residents in the LA-area suburbs of Azusa and Glendora.

KABC notes the homes in the evacuation zones are in areas near hills that were scorched by a wildfire back in January. Officials are worried the rain on the recently burned ground could cause mudslides.

So far, the rain has already led to the shutdown of part of the popular Pacific Coast Highway. KNBC points out large rocks falling onto the highway caused the California Highway Patrol to issue the partial closure.

Despite the reported damage, Californians will probably be happy to see the rain. According to USA Today, 2013 was the state's driest year on record.

And, as of Thursday, almost 95 percent of the state is in a drought — up sharply from 47 percent at this time last year. (Via National Drought Mitigation Center)

NBC points out parts of Southern California could get more rain from this storm system than it got in all of 2013.

AL ROKER: "Anywhere from 3 to 6 inches of rain. But you get into the foothills outside of Los Angeles — 4 to 8 inches, and locally up to 10 inches of rain."

And while all that expected rain is a step in the right direction, the San Gabriel Valley Tribune reports it won't do much to stop California's stubborn drought.

A climatologist told the paper: ​"This is not a regime shift in the Jet Stream pattern. This is a rogue storm. A powerful rogue storm. ... This is no drought buster."

NBC reports that besides the rain and possible mudslides, there's a chance of strong winds and even small tornadoes.