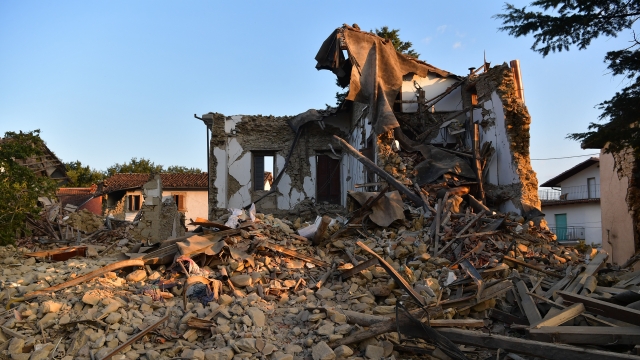 SMS
Devastating Earthquake Brings Up Legal Questions In Italy
By Lindsey Pulse
By Lindsey Pulse
August 28, 2016
Buildings in Italy are often more than 100 years old, and getting them up to code isn't always financially plausible.
SHOW TRANSCRIPT

Officials have begun investigating building code violations in central Italy where an earthquake turned structures into rubble earlier this week.

The 6.2 magnitude quake killed at least 290 people, most of them from the small city of Amatrice. Citizens and authorities are still searching the ruins for victims.

But the fact that the earthquake caused so many structures to collapse has many questioning whether the area's buildings were up to code.

Buildings in Italy are sometimes more than 100 years old and not always up to seismic standards.

But prosecutors are also looking into the possibility that some property owners altered the structures of their homes without bringing them up to code. Special attention will reportedly be paid to a bell tower restored in 2009 and an elementary school renovated to withstand earthquakes in 2012.

And while Italy might have the physical resources to renovate the century-old buildings, the hold up often comes down to money.

Voice of America quoted one man saying its "impossible or prohibitively expensive to make changes within the regulations that are drawn up by the government in Rome."

Those that did recently renovate and violate building codes could reportedly face criminal charges. The timing of the investigation has angered some survivors and families still mourning those killed by the quake.

Money isn't the only pillar the towns have to overcome. Corruption also plays a role in a city's ability to move forward.

More specifically, Italian authorities are now tasked with keeping the mafia out of rebuilding efforts.