Officer Pays For Diapers After Mother Attempts To Steal Them 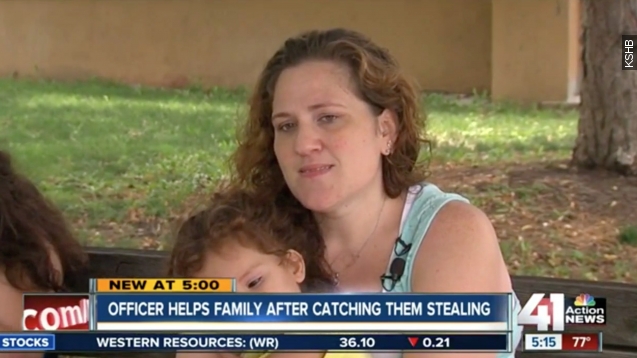 SMS
Officer Pays For Diapers After Mother Attempts To Steal Them
By Christine Slusser
By Christine Slusser
July 10, 2015
Sarah Robinson was trying to steal diapers, wipes and shoes for her six children. She got caught, but a Kansas police officer stepped in to help.
SHOW TRANSCRIPT

An officer was called to a local Kansas Wal-Mart for shoplifting — unfortunately, probably something that's pretty run-of-the-mill.

What happened next was anything but. Officer Mark Engravalle with Roeland Park Police actually helped the shoplifter by buying her some of the items she was trying to steal.

"Being a father myself, it obviously pulled at my heart," Engravalle said.

"The officer ducked back into Wal-Mart to buy wipes, diapers and a pair of shoes for each of Robinson's children," the reporter said.

"He helped us when nobody else will," Robinson said.

Newsy's partners at KSHB also spoke with the accused shoplifter, Sarah Robinson. She has six kids and is currently living out of her car.

"We got everything taken from us, and it's just really hard right now," Robinson told KSHB.

"She and her six kids have been living in her car, and occasionally renting a one-bedroom room in a stranger's home since her husband died unexpectedly a few years ago," the reporter said.

Robinson's husband died in a drowning accident in 2011.

Robinson told KCTV she had never done anything like that before.

"I'm not very good at the criminal thing," Robinson said.

Officer Engravalle said the look on Robinson's children's faces was enough of a thank you. Since she broke the law, he did write her a ticket. She says she's embarrassed by her actions, but had nowhere else to turn.

"What she did was wrong, but I think her heart was in the right place with wanting to take care of her children," Engravalle said.