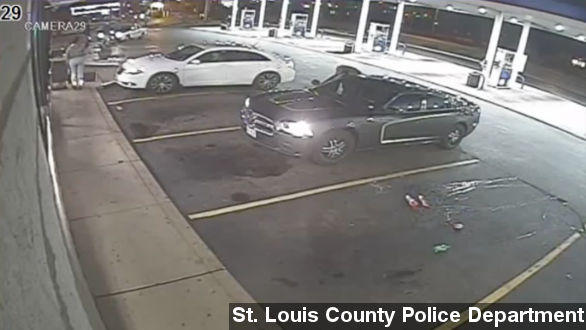 SMS
Officer Kills Teen In St. Louis Suburb Neighboring Ferguson
By Cliff Judy
By Cliff Judy
December 24, 2014
Police in Berkeley, Mo., say an 18-year-old man pulled a gun on an officer. Police have released surveillance video of what led up to the incident.
SHOW TRANSCRIPT

A police officer in a St. Louis suburb shot and killed a teenager late Tuesday night. Police quickly released details saying the teen was armed and threatened the officer.

Police say the officer was supposed to check on a larceny call from a gas station in Berkeley, Missouri, and the 18-year-old man pulled a gun while talking to the officer. The gas station is only about five miles from the spot where a Ferguson police officer shot and killed unarmed teen Michael Brown in August, sparking months of anger and violent protests over Brown's killing and a grand jury's decision not to indict the officer who killed him. (Video via KTVI)

The details in this latest officer-involved shooting appear to differ significantly from Ferguson.

In this surveillance video released early Wednesday morning by St. Louis County Police, you see the officer talking with a man for about a minute and a half until the man takes a few steps away from the officer. The released video ends with the man raising his right hand. Police say he was raising his weapon, and that's when the officer fired.

Still, in an area where the community's relationship with police is strained at best and racial tensions long since boiled over, it shouldn't be surprising a crowd of a few hundred gathered overnight. Local reporters said protesters remained peaceful for a couple of hours until someone threw rocks and bricks at officers on scene and police tried to clear the crowd. (Video via KMOV)

Several shots of video aired by local affiliates showed a gun laying next to the body of the 18-year-old man, which police say is the weapon he pointed at the Berkeley officer. A woman who said she was the man's mother insisted he didn't have a gun and only just left his house to visit his girlfriend. (Video via KSDK)

"His girlfriend stays over here," Toni Martin told KSDK. "He came over here and he just left. He just left the house to go see her."

Local media outlets were split in identifying the teenager, despite most of them talking to his mother who presumably gave his name. The St. Louis Post-Dispatch and KTVI identified him as Antonio Martin.