Officer Investigated After Tossing Peanuts At Man In Custody 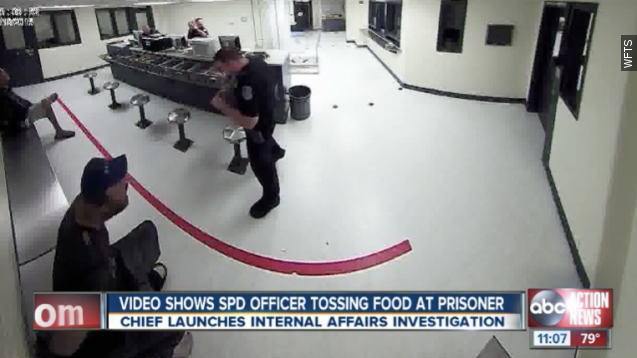 SMS
Officer Investigated After Tossing Peanuts At Man In Custody
By Becca Dunn
By Becca Dunn
July 28, 2015
A Florida police officer is under investigation after a recently released surveillance video shows him tossing food at a homeless man.
SHOW TRANSCRIPT

A Sarasota, Florida, police officer is under investigation after tossing peanuts toward a homeless man in custody.

The video shows Officer Andrew Halpin tossing the food at Randy Miller, who then gets on the ground to eat it. Then, there's what sounds like laughing in the background from the other officers watching.

The Herald-Tribune reports Miller was treated like an "animal." A source told the outlet Halpin gave Miller "dog commands" during the incident.

Halpin is currently on paid administrative leave, though some say that's not enough.

In 2005, two advocacy organizations said Sarasota was the "meanest city" to homeless people.

Miller was arrested July 18. The surveillance video was released Monday.