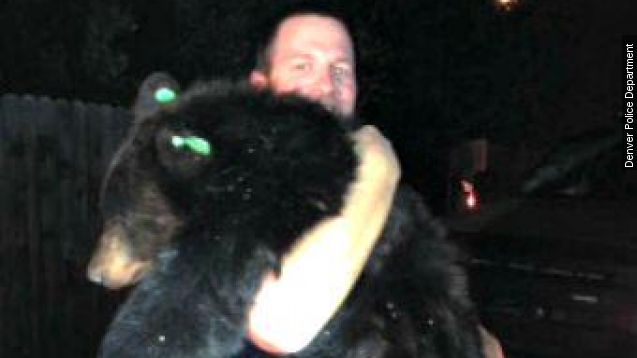 How's this for a bear hug? There's a story behind this — we promise.

"My wife called just to say 'good night,' and she goes, 'Hey, there's a bear running around in your district,' and I said, 'OK,' and she said, 'Go find it,'" officer Dan Swanson said.

Officer Dan Swanson found the bear wandering around Monroe Street in Denver, and authorities later tranquilized it. But at least officer Swanson wasn't in a grizzly mood. He offered his help.

There were reports of a bear wandering around the Denver area earlier. Someone on Twitter asked the police department if it was the same bear. Warning: Snarky response ahead:

"We're not sure, he didn't leave a business card, but he does match the description."

And if you live in bear country and have been seeing more bears, it's because a food shortage is causing them to wander from their neck of the woods into yours.

Earlier this month in California, a man was attacked by a bear that was probably digging through his trash.

Also this month, Colorado Springs officers had to help a bear cub that got its head stuck in a bottle.

And just a few days ago, a bear was spotted in a Wal-Mart parking lot in Parker, Colorado.

Really, we think bears are just trying to take over human civilization. We have better food.

This video includes an image from the Denver Police Department.