Of Course The 'Fantastic Beasts' Movie Count Might Go Up 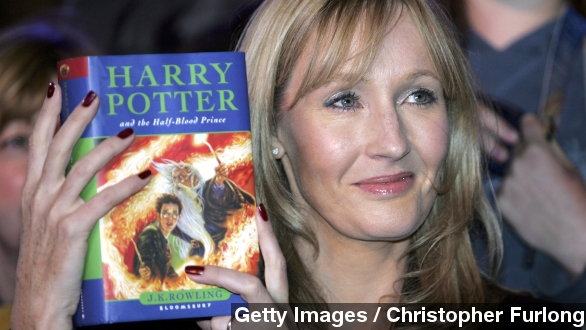 Harry Potter fans, you had to know it was coming. J.K. Rowling's proven time and again, just because she promised she'd never write specifically about the boy wizard again didn't mean she couldn't write about Harry Potter's world.

At its annual investors meeting, Time Warner was already expected to announce future plans for several movies. As one of the Wall Street Journal reporters attending the meetings tweeted, the Harry Potter spinoff "Fantastic Beasts and Where to Find Them" will get at least three movies.

Warner Brothers had already announced plans to make three movies during a profile of the company's CEO in March for The New York Times.

But it's the at least that's getting all the attention now.

Rowling will obviously be heavily involved and as some outlets have speculated, she'll probably start dropping hints of future storylines in the first few movies if she does indeed agree to help make more than three. (Video via CBS)

"Fantastic Beasts" is one of the fictional textbooks Harry Potter uses while studying at the wizarding school Hogwarts. It's first referenced in the first Potter book and movie, "Harry Potter and the Sorcerer's Stone."

Rowling actually published the book as a supplement to her Potter books in 2001, and the fictional writer is someone who documented species of magical creatures. The original book is only about 60 pages long. (Video via YouTube / WiseHufflepuff)

So a book with less than 100 pages is going to get at least three major Hollywood-produced movies.

That follows the recent Hollywood trend of squeezing as much screen time as possible out of relatively little content. At less than 400 pages, the third Hunger Games book "Mockingjay" is split into two movies and quickly had some critics questioning the necessity of all the content.

When J.R.R. Tolkien's "The Hobbit" — a book far shorter than the "Lord of the Rings" books it prequeled — was broken up into three movies, Gawker joked it was because the director couldn't make movies unless they were trilogies.

Ironically, Rowling's own books are largely credited for inspiring Hollywood's appetite for multiple movies based on one book.

But at least when they split up the last Harry Potter book "The Deathly Hallows" into two movies, that novel was pretty big at more than 600 pages. (Video via YouTube / eviltig)

Somehow, we doubt Potter fans are complaining, and the Hollywood movie executives know it.