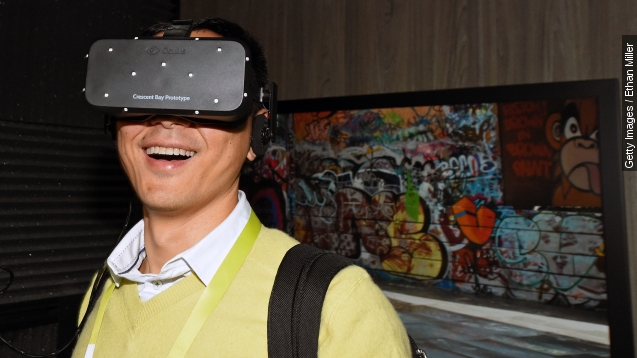 SMS
Oculus VR Tech Specs Keep It Focused On Gaming For Now
By Ben Lawson
By Ben Lawson
May 15, 2015
Oculus VR has revealed the tech specs recommended to run Rift, and they seem to suggest the VR headset will stay focused on gaming for now.
SHOW TRANSCRIPT

Oculus VR has revealed the recommended specs to run its virtual reality headset, and it looks like gamers might be the few who have computers up to snuff.

The recommended specs are:

The minimum requirements don't lead to the most expensive computer on the market, but they will likely cost around a grand. That doesn't even include the cost of the headset. We still don't know how much a consumer version of that will cost.

It shouldn't come as much of a surprise that only a high-powered system can run the Oculus Rift. A computer running too slow would create some visual lag, and that's how you end up getting nauseated and barfing on your expensive computer.

But this news does make it seem like Oculus and its developers' focus is going to have to stay on gamers for the most part — at least in its early years.

Currently, most people who already have computers capable of running the device are using them to play games. And Oculus sounds just plain awesome for gaming anyway.

The downside of this is that other uses for Oculus could trickle out a little more slowly, at least at the consumer level — the biggest one being virtual reality movies. Hollywood might be a little slow to adopt if it thinks there isn't a huge audience.

But Oculus has said these specs will stay constant for the lifetime of the Rift, which is good news considering the price of PC parts can drop pretty quickly as they get updated. So if you need a new rig for Oculus and want to save a few bucks, you could just wait awhile.

No official release date for the Rift has been set, but the company is shooting for sometime in 2016.