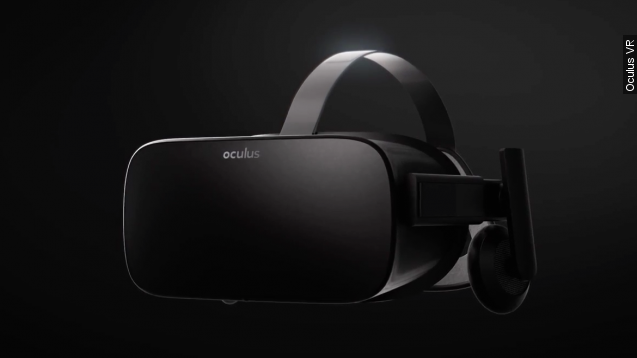 SMS
Oculus' Microsoft Partnership Makes A Lot Of Sense
By Ben Lawson
By Ben Lawson
June 11, 2015
Oculus' partnership with Microsoft might seem strange at first, but it's a pretty good fit for both companies.
SHOW TRANSCRIPT

The Oculus VR press conference was chock full of new information about the Oculus Rift, but one announcement in particular stood out: the Facebook-owned company is partnering closely with Microsoft.

"I'm Phil Spencer, head of Xbox. And I'm excited to be here to announce a partnership between Microsoft and a leader in virtual reality, Oculus," Microsoft's Phil Spencer said.

When the Oculus Rift ships early next year it will come with an Xbox One controller, will stream Xbox games and is described as working "natively" on Windows.

The partnership is a weird one seeing as Microsoft already has the HoloLens, an augmented reality device, somewhere in its pipeline.

So the news can be interpreted a couple ways. It's possible Microsoft isn't focusing on gaming for the HoloLens, even though we have already seen how "Minecraft" would look with HoloLens.

Microsoft might also be realizing the obvious — that the Rift is going to hit store shelves so much sooner and already has the lion's share of the public's attention. A partnership would help the tech giant avoid getting left behind the virtual reality space.

Or this could be just how committed Microsoft is to providing as many gaming accessories as possible for the Xbox One. The company has gotten a public beating by Sony's PS4, so it's probably more willing than ever to swallow its pride and take some outside help.

Sony's Project Morpheus is said to be able to work natively from a PS4, which likely terrifies Xbox head Phil Spencer and other Microsoft execs. Getting Oculus on the Xbox One ASAP probably sounds pretty great to them.

Just to be clear, it's not like Rift will be plugging in directly to the Xbox One, at least not at first. At launch it can only stream Xbox One games to the Rift through Windows 10. Meaning there are no VR games in the works specifically for the Xbox One. But keep dreaming.

So however odd it sounds at first, a Microsoft-Oculus partnership makes a lot of sense, especially for Oculus.

Many tech analysts seem to agree that the Oculus is likely to have a tough time breaking out of the tech enthusiast niche at first, which makes gamers feel like a great target for the device early on. Gamers are the ones with computers powerful enough to run the Rift, and Windows has dominated PC gaming for years.