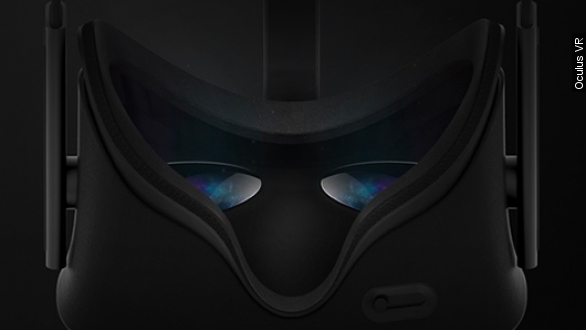 SMS
Oculus Rift Approaches Reality With Early 2016 Release Date
By Evan Thomas
By Evan Thomas
May 6, 2015
Oculus says its Rift virtual-reality headset will debut between January and March 2016, its most narrow launch window yet.
SHOW TRANSCRIPT

Oculus announced Wednesday the first consumer version of its Rift virtual-reality headset will arrive in the first quarter of 2016.

Images in its blog post show its first consumer version will sport a smoother design, and the company said CV1 builds on the tech of its most advanced prototypes. But other than that marketing speak, Oculus is keeping mostly quiet on what's under the hood — or visor. (Video via CNET)

We did hear from founder Palmer Luckey at this year's South by Southwest that the latest Rift prototype uses two screens, which could clear up complaints of low resolution in earlier versions. (Video via SXSW)

The good news is Oculus will get into the rest of the technical specifications next week. This is important for both consumers and developers who are building games for the headset.

Gamemakers need to know what resources they have available to create their games, and consumers need to know much computer power they'll need to get the most out of the headset.

For what it's worth, this the firmest announcement yet in what has been a historically cagey development and release timeline.

"I'll go on the record as saying that hardware-wise for the headset, it's arguably almost there for the consumer product, and now there are some other parts." (Video via Web Summit)

That was Oculus CEO Brendan Iribe in November 2014. The month before then, rumors surfaced Oculus would be making a limited release in summer of 2015. Oculus never commented.

A release date is big news for competitors, too. It means the first mover in consumer VR will be Valve and HTC, with their Vive headset. The companies say a consumer edition will be ready by the end of 2015.