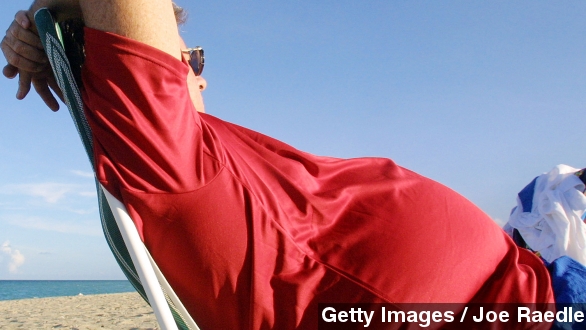 There's a new study explaining one of the reasons why we're all so overweight. Get ready for pictures and videos of people with their heads either looking away or out of frame.

But in a time when obesity is being blamed on everything from candy and soft drinks to fatty foods to inactivity to lack of sleep — sleep, by the way, we'd think would fall under inactivity — your birth year is now being blamed. (Video via Coca-Cola, YouTube / I Heart Recipes, Fox Sports, Sleep Number)

The study is already in the early edition of the Proceedings of the National Academy of Sciences and suggests the later you were born, the greater the chance of being obese.

This study is based on crunching numbers from another study thousands of people strong that's still ongoing — the Framingham Heart Study.

The Framingham Heart Study is based on continually studying three generations of families in Framingham, Massachusetts, starting back in the 1940s. It's been the basis for discoveries involving smoking, cholesterol and blood pressure's effect on the cardiovascular disease — along with some rather odd findings.

"When a close friend became obese, a person's own risk of obesity increased by 171 percent," Justin Cohen of The Human Experiment explains.

Researchers had already found that people with certain genes had a higher risk of obesity, but they wanted to evaluate whether that higher risk was also affected by time.

It was. Scientists say people born before 1942 had no increased risk of high body mass index or obesity. People born after that did, even if they were siblings.

In a press release published in the Harvard Gazette, the lead researcher said, "The fact that our effect can be seen even among siblings born during different years implies that global environmental factors such as trends in food products and workplace activity, not just those found within families, may impact genetic traits.”

Or perhaps more bluntly, he told NBC the gene "may be some kind of McDonald's gene or some kind of office chair gene."

Of course, this study considers all study participants equal when it comes to their own personal habits, meaning fully relying on the year theory is to ignore a person's own goals of keeping the weight off. (Video via Gold's Gym)

So if you're a member of the Mature/Silents generation, enjoy your golden years knowing there's nothing about our culture that has you weighing more than you should. Baby boomers, Generation X and millennials, we're in trouble — unless, of course, we do something about it.