Obesity Costs Almost As Much As War And Terrorism 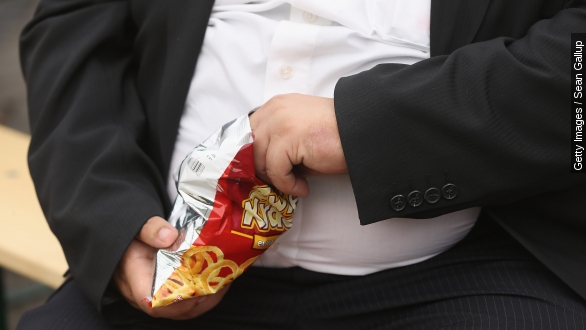 It's easy to get lost in the sea of statistics surrounding the obesity epidemic, but this most recent number jumps out at you — $2 trillion.

That's the impact a study says the obesity epidemic has on the global economy, putting it just behind war and terrorism, and smoking. (Video via ABC)

Analysis from the McKinsey Global Institute cites the number of obese people in the world — some 2 billion — and argues an intervention is needed because current trends would leave close to half of the world's population obese by 2030.

In the United States the Centers for Disease Control and Prevention's current numbers show close to 40 percent of adults are obese, with 17 percent of children obese as well — numbers that are projected to rise. (Video via George Washington University)

Child obesity in particular goes a long way toward hiking up healthcare costs — a study earlier this year found child obesity could increase the cost of care by close to $20,000 over a lifetime. (Video via CBS)

But obesity rates aren't rising in the U.S. alone — the developing world has also seen a spike in the number of obese people.

Steve Wiggins of the Overseas Development Institute told The Guardian, "The statistics are quite sensational: it's a tripling of the number of people who are considered overweight and obese in the developing world since 1980"

As The Atlantic reports, analysts chalk up the increase in obesity in developing countries to rising incomes, urbanization and television.

McKinsey advises a number of specific measures, such as reducing portion sizes, but says to make a real dent in obesity rates, change has to come from all sectors of society.