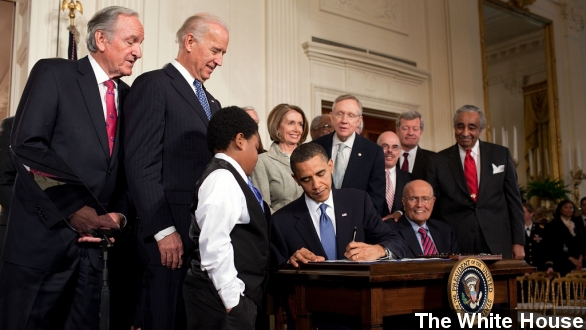 Unless you live in DC or one of the 14 states in red, you’ll wanna pay attention to the Supreme Court, which just decided to look at whether federal subsidies under Obamacare are legal.

It’s a big deal because insurance under the Affordable Care Act is only — well, affordable, in most states because federal tax credits take a big chunk out of monthly premiums.

See — under the ACA, if your income is up to 400 percent of the federal poverty line, you can qualify for credits. That basically means the federal government pays part of your premiums. And according to Obama administration officials, that can take an average premium of about $350 to around $80. (Video via HealthCare.gov)

Now, the black and white language of the law says those tax credits go to health exchanges “established by the state.”

Let’s look at that map again. Thirty-six states — the ones NOT in red — chose not to set up their own exchanges. Which means the federal government runs it in those states.

So if you read it literally, that “established by the state” language of the law means federal exchanges aren’t included. There are four lawsuits making that argument right now, and we’ve heard appeals court rulings on two of them.

They were — as luck would have it — two completely contradictory rulings within hours of each other.

PRESIDENT OBAMA, VIA THE WALL STREET JOURNAL: “Why are folks working so hard for people not to have health insurance?”

Obama administration officials say the argument is laughable, that just because the language of the law doesn’t specifically include the federal exchange doesn’t mean it specifically excludes it.

Five of the Democratic senators who helped write the law in fact wrote an op-ed in The Washington Post saying they never intended to limit assistance based on a state or federally run exchange.

So a couple things could happen to save the subsidies in those 36 states: They could set up their own exchanges after all — which is unlikely on a wide scale since many opted out in the first place because their Republican governors opposed the law. As for just fixing the language as the law’s authors say they always meant for it to read anyway — also not likely since Republicans are about to take full control of both chambers of Congress in January.

That’s where the Supreme Court comes in. The justices aren’t going to wait for a decision on the other two legal challenges to the subsidies before weighing in.