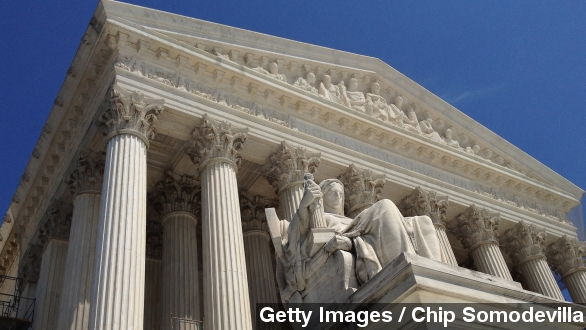 After more than two years, President Obama's signature health care law is in the Supreme Court once again. But in a bizarre twist, opponents of Obamacare aren't challenging the constitutionality of the law. Instead, they're asking the court to enforce it.

Wednesday, the court heard oral arguments in the case of King v. Burwell. The case deals with the subsidies offered to middle- and lower-income Americans who buy health insurance on health care exchanges, and it more or less hinges on a single sentence.

A key part of the Affordable Care Act describes who can get subsidies: people who enrolled "through an Exchange established by the State."

See, the law gives states the right to set up their own health insurance marketplaces, but at least 34 states have opted not to. Instead, the federal government manages the marketplaces for those states.

And one of the key provisions of the law is that people who buy insurance on those marketplaces are eligible for subsidies to make their plans more affordable.

The federal government has always interpreted the law as saying anyone who buys insurance on an exchange can get subsidies, regardless of where they live.

But the challengers in the Supreme Court case point to that phrase, "established by the State," to argue that people in those 34 states run by the federal exchange aren't legally eligible for subsidies.

"This is not a constitutional challenge to Obamacare. This is a straightforward case of statutory interpretation," said Cato Institute health policy analyst Michael F. Cannon.

If the court sides with the challengers, the approximately 8 million people living in those 34 states who buy insurance on the federal exchange would lose their subsidies, making their plans unaffordable.

The New York Times reports, "If the court decides to limit federal tax credits, the result could essentially be the creation of two American healthcare systems."

It's a strange case because, despite the fact that no one involved in creating the law intended subsidies to be based on where someone lives, that sentence is in there. (Video via The White House)

The administration has issued dire warnings about the impact a court ruling in favor of the challengers could have.

A government-commissioned study last fall said taking away subsidies would drive down enrollment and drive up premiums, putting the whole system at risk of collapse. It used the phrase "death spiral" repeatedly.

And in a letter in January, Health and Human Services secretary Sylvia Burwell told a member of Congress the administration has no backup plan, saying, "We know of no administrative actions that could, and therefore we have no plans that would, undo the massive damage to our health care system that would be caused by an adverse decision."

The administration is acting confident about the case, saying it's obvious from reading the rest of the law that subsidies were supposed to be for everyone.

White House press secretary Josh Earnest said Wednesday, "You have to really take four words out of context in a 900-page law to make it mean what the plaintiffs in this case want it to mean."

But the law's opponents have made it clear they'll pursue any means to cripple Obamacare. A board member and former chair of the Competitive Enterprise Institute, the group funding the legal challenge, made that perfectly clear at a 2010 conference:

"This bastard has to be killed as a matter of political hygiene. I do not care how this is done, whether it's dismembered, whether we drive a stake through its heart, whether we tar and feather it and drive it out of town. ... Any dollar spent on that goal is worth spending."

The justices are expected to issue their decision in the case sometime before June.