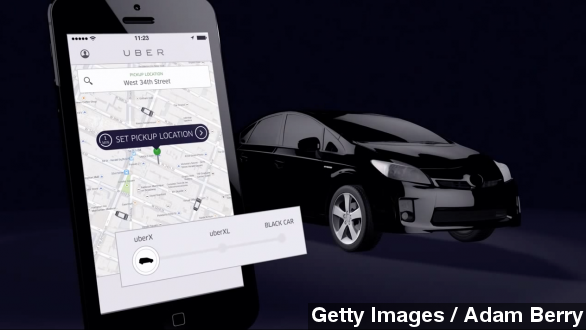 SMS
Obamacare, Dirty Tactics And Why Uber Can't Make Friends
By Jake Godin
By Jake Godin
November 18, 2014
Whether Uber's CEO is praising Obamacare or a VP is talking about digging up dirt on journalists, the ridesharing company grabs plenty of headlines.
SHOW TRANSCRIPT

Uber's got a headline problem. That's because it's swiftly becoming the kind of company that, whether for better or worse, just can't seem to stop making waves in Silicon Valley.

Take the ridesharing company's position on the Affordable Care Act, or Obamacare, for example.

A New York Magazine article notes how much that endorsement shattered what Republicans had originally thought of the company — as a sort of "idealized self-image as advocates of dynamism rather than existing privilege, new technology rather than financial manipulation or resource extraction." (Video via Uber)

And then there's the issue of a senior Uber exec's remarks concerning digging up dirt on journalists, also first reported by BuzzFeed.

BuzzFeed reports that Emil Michael, Uber's senior VP of business, suggested his company could dig up dirt on journalists seen to be against Uber, then use it as leverage against them. (Video via Fox Business)

One specific target Michael had in mind was Sarah Lacy, editor-in-chief of Silicon Valley's PandoDaily, who harshly criticized Uber in October over what she called a sexist advertisement in France. (Video via YouTube / Blonde2.0)

Michael argued he was under the impression the whole conversation was off the record, and he's since apologized profusely for the remarks, saying they don't represent Uber's views and were made while "venting."

While this week has been about Obamacare endorsements and hypothetical unethical practices, Uber has been a magnet for headlines almost since its inception.

From causing taxi drivers worldwide to strike from its impact on the taxi industry ...

KGO-TV: "Late last night, taxi drivers caused delays and headaches in a protest against ride services like Uber and Lyft."

BLOOMBERG: "Well, our top story to get you started has to be Uber, right? The car service gets that uber valuation ... "

To even reports the company has a special "playbook" for sabotaging its competitors.

So while the company is getting only getting bigger — it's reportedly seeking a $1 billion investment for international expansion — it'll also have to face increased scrutiny over whatever it may be doing alongside that success.