Obama Will Visit South Dakota, His 50th State, In May 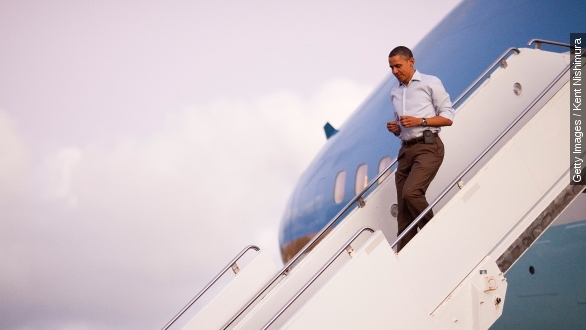 SMS
Obama Will Visit South Dakota, His 50th State, In May
By Matt Picht
By Matt Picht
April 13, 2015
President Obama has visited 49 states so far, and he's planning a trip to South Dakota in May to round off the list.
SHOW TRANSCRIPT

When President Obama delivers the commencement address at South Dakota's Lake Area Technical Institute on May 8, he'll have done something very few other presidents have managed: visit all 50 states during his term in office.

Local TV station KSFY broke the news when one of their anchors got the chance to interview the President in Washington.

Anchor Nancy Naeve reported, "Of course, I had to ask him, 'Are you ever coming to South Dakota? We're the only state you haven't gone to as a sitting President.' Here's what he had to say."

The speech gives Obama the opportunity to reach a rare milestone: only three previous presidents — Richard Nixon, George H.W. Bush, and Bill Clinton — managed to visit all 50 states while in office.

Obama's predecessor, George W. Bush, made it to 49 states but didn't reach Vermont during his presidency. That might have been because, as political science professor Brendan Doherty told The Washington Post, "By 2008 'thirty towns and cities in Vermont had adopted resolutions urging Bush's impeachment.' One town even called for his arrest if he ever showed up." (Video via CBS)

But Obama's made it a point to check every state off the list. He started the year with just four states unaccounted for — since then, he's visited Boise State University in Idaho, Benedict College in South Carolina and Hill Air Force Base in Utah. (Video via The New York Times)

Unsurprisingly, as NPR points out, the president lost all of these states pretty badly in the last election. Doherty, who's something of an authority on the subject of presidential travel, noted these states are also "scarcely populated ... electorally non-competitive and ... they tend to be hard to get to."

Obama said he hopes to promote his plan for tuition-free community college during this trip and chose to speak at Lake Area Tech because of its high graduation rate.