Obama: 'We Have To Open Our Hearts' And Help Refugees 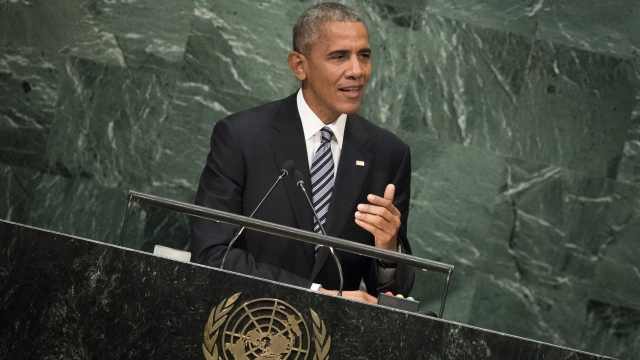 SMS
Obama: 'We Have To Open Our Hearts' And Help Refugees
By Briana Koeneman
By Briana Koeneman
September 20, 2016
During his final speech to the U.N. Assembly, President Obama urged world leaders to put themselves in a migrant's shoes and help those in need.
SHOW TRANSCRIPT

During his final speech to the U.N. Assembly, President Barack Obama intensified his call for world leaders to accept refugees.

"We have to open our hearts and do more to help refugees who are desperate for a home," Obama said.

He urged leaders to put themselves in migrants' shoes and help those in need, in spite of the politics.

"We have to imagine what it would be like for our family, for our children, if the unspeakable happened to us," he continued.

He added that many countries are already doing this.

But he said nations that have more money and better geographic locations can do more.

Obama's speech comes just days after police say a naturalized citizen born in Afghanistan set off bombs in both Manhattan and New Jersey.

And the candidates battling for Obama's seat wasted no time addressing the issue.

"Hillary Clinton wants to allow hundreds of thousands of these same people that are, you know, they have such hatred and sickness in their hearts. It's sickness," Donald Trump told Fox News.

"So I am absolutely in favor of, and have long been an advocate for, tough vetting for making sure that we don't let people into this country, and not just people who come here to settle, but we need a better visa system," Hillary Clinton said during a press conference.

According to U.N. estimates, there were about 21.3 million refugees worldwide in 2015.