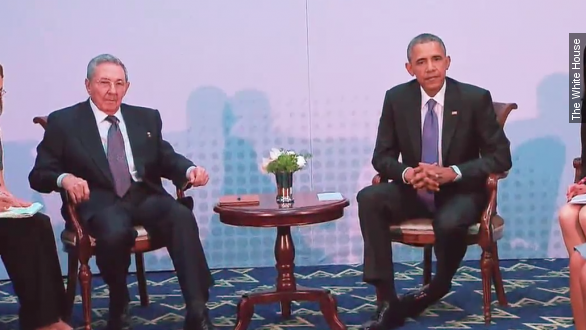 SMS
Obama Wants Cuba Taken Off US Terror List
By Kate Grumke
By Kate Grumke
April 14, 2015
After the State Department recommended Cuba be removed from the U.S.'s list of countries that sponsor terrorism, Obama gave his approval Tuesday.
SHOW TRANSCRIPT

President Obama is putting his stamp of approval on removing Cuba from the U.S.'s list of countries that sponsor terrorism.

Last week, the State Department sent the White House the recommendation to remove Cuba from the list, as Obama was on his way to an Americas summit where he met with Cuban leader Raul Castro.

On Tuesday, the White House announced Obama approved that State Department recommendation and submitted it to Congress.

This is the next step in ongoing talks to get the U.S. and Cuba back on diplomatic terms. Removal from the list was one of Cuba's main demands in the negotiations. (Video via EuroNews)

The Republican-controlled Senate and House now have a 45-day window to block this recommendation, which some lawmakers have said they would do. After those 45 days, Cuba will be removed from the list.