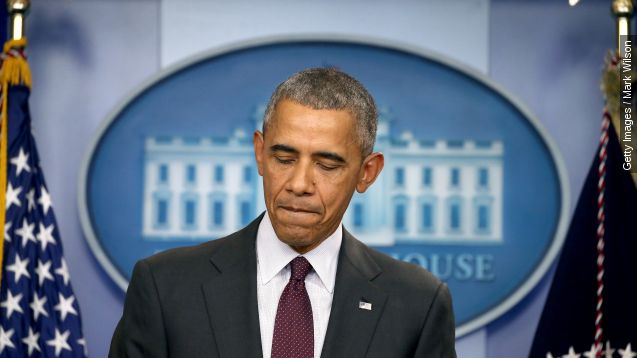 “I hope and pray I don’t have to come out again during my tenure as president and offer my condolences to families in these circumstances. But based on my experience as president, I can’t guarantee that. And that’s terrible to say. And it can change,” President Obama said to reporters.

“We are the only advanced country that sees these kinds of mass shootings every few months,” Obama said.

“At this time, we are reporting and can confirm 10 fatalities in the shooting, seven additional injuries … and three of those that were critically injured,” Douglas County Sheriff Jon Hanlin told reporters.

The News-Review out of Roseburg interviewed a student who witnessed the shooting. She said the shooter reportedly “told people to get on the ground. The shooter was asking people to stand up and state their religion and then started firing away.”

Douglas County Sheriff Jon Hanlin said the shooter was a 20-year-old man who was killed when he exchanged gunfire with police. (Video via The News-Review)

Umpqua Community College president Rita Cavin told reporters the school does have security personnel who were on campus. She also said the school has a “no guns on campus” policy. (Video via The Oregonian)

State police, local agencies, the FBI and U.S. Marshals, to name a few, all responded to the shooting. Authorities say it’ll be another 24-48 hours until they release the names of the victims killed in Thursday’s shooting. (Video via KGW-TV)