Obama: U.S. To Withdraw Troops From Afghanistan By 2017 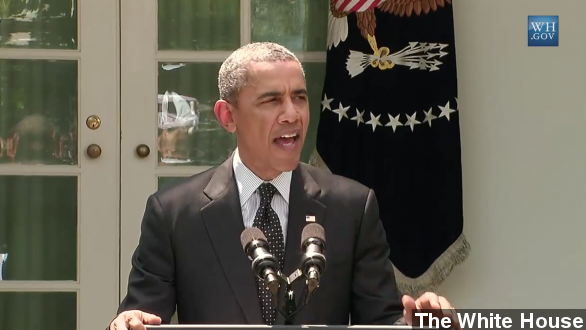 Obama: "I think Americans have learned that it's harder to end wars than it is to start them. ... The bottom line is that its time to turn the page on more than a decade when so much of our foreign policy was focused on the wars in Afghanistan and Iraq." (Via The White House)

With that statement Tuesday, President Obama announced a more specific timeline for ending U.S. combat missions in Afghanistan and dramatically scaling back the number of U.S. troops in the Middle Eastern country.

Obama said during his speech in the Rose Garden he plans to leave 9,800 U.S. troops in Afghanistan after this year. He also said he plans to cut that number in half by the end of 2015 and withdraw all U.S. troops from Afghanistan by 2016. (Via U.S. Army)

But those missions and the retainment of U.S. troops in Afghanistan hinges on the Afghan government signing the Bilateral Security Agreement. Outgoing Afghan President Hamid Karzai has declined to sign that security deal, but both presidential candidates said they will sign it if elected. (Via The White House)

Obama's plan to withdraw troops is an attempt to transition power to the Afghan people following the end of the War in Afghanistan in what will be the first democratic transfer of presidential power in the country's history. (Via CNN)

Obama: "We have to recognize Afghanistan will not be a perfect place and it is not America's responsibility to make it one. The future of Afghanistan must be decided by Afghans." (Via C-SPAN)

There are currently more than 32,000 U.S. troops in Afghanistan. While some Republican critics agree the war in Afghanistan should end, they also say President Obama's current approach is a mistake.

Senators John McCain, Lindsey Graham and Kelly Ayotte released a joint statement calling Obama's timeline a "monumental mistake and a triumph of politics over strategy" and added Tuesday's announcement will "embolden our enemies and discourage our partners in Afghanistan and the region." (Via Office of Sen. John McCain)

Obama will travel to West Point Wednesday where he is expected to detail more plans about the U.S. troop withdrawal from Afghanistan while giving the commencement address at the U.S. Military Academy.