Obama To Request $1B For Guatemala, Honduras, El Salvador 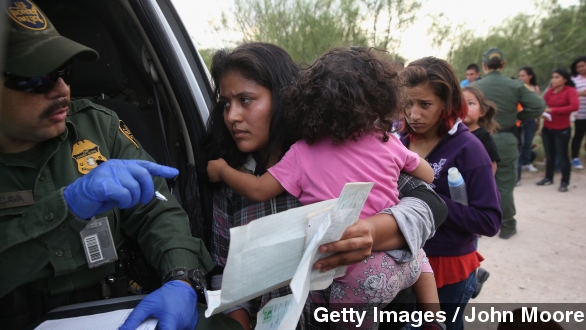 President Obama will ask Congress for $1 billion in aid for El Salvador, Honduras and Guatemala, according to an op-ed Joe Biden wrote in the New York Times.

"We have to deter a continuing influx of children putting themselves at great risk," President Obama said last summer.

Central American leaders have been discussing solutions with The White House since a visit to Washington last July. (Video via WJLA)

The requested $1 billion would go to the three main countries that fueled the surge in child migrants at the U.S. border this summer. (Video via ABC)

"They had already told me that they were going to kill me," one undocumented migrant minor told CBS.

Many, like the one you just heard from, say they were running from gang violence in their home countries. Others from poverty.

Biden wrote, "The security and prosperity of Central America are inextricably linked with our own."

The aid money is part of a plan to address three major development issues in the region: security, government accountability and economic opportunity.

For security, Biden wants to beef up community policing and work to push out organized crime groups, like the cartels, from the region. (Video via Government of Guatemala)

For government accountability, the plan is to make the tax and court systems more transparent in a region where perceived corruption is high. (Video via TVC Honduras)

And finally, the Obama administration has some ideas to create economic opportunity. These include improved regulations to attract more foreign investment and trade plus investment in education. (Video via Government of Guatemala)

But some seem less optimistic. Fox News host Steve Doocy summed up his thoughts Friday morning: "'The money will end poverty and keep children from seeking opportunities in the United States.' Good in theory ... "

If Congress approves this $1 billion proposal, the U.S. will commit to giving the region three times as much aid as it has in years past.