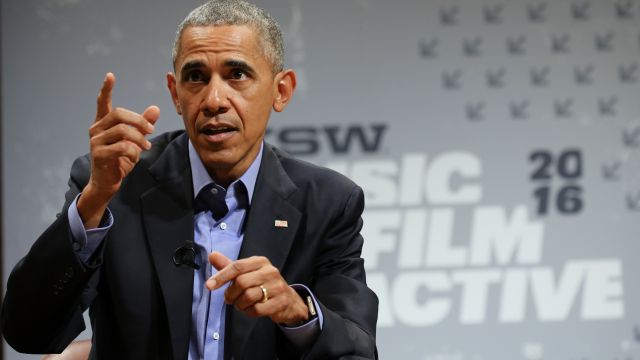 By Matt Picht
March 11, 2016
President Obama told South By Southwest that some concessions are necessary when it comes to digital privacy.
SHOW TRANSCRIPT

When President Obama visited South by Southwest this weekend, he made it clear he wasn't going to talk about the ongoing legal battle between Apple and the federal government. But he did weigh in on some broader questions about encryption and digital privacy.

"I would caution against taking an absolutist perspective on this. We make compromises all the time. ... It's fetishizing our phones above every other value, and that can't be the right answer," Obama said.

Obama told the crowd individuals must be prepared to make some concessions to the government when it comes to digital privacy, as they do with almost every right. He also cautioned it would be much safer for the tech sector to voluntarily find an encryption compromise than to wait for congressional compulsion.

The president did acknowledge concerns about government overreach, noting the Edward Snowden leaks made everyone much more sensitive about this issue.

And Obama briefly alluded to the main challenge to finding an encryption compromise: Subverting encryption for some specific cases will lead to weaker encryption in all cases. Though he didn't offer any specific solutions, the president did at least acknowledge weaker encryption could benefit cyberterrorists and hostile nations.

Obama's keynote also addressed how government and the tech industry can efficiently work together for their mutual benefit. He cited the rollout of Healthcare.gov as an example of how not to do that.

This video includes images from Getty Images and clips from C-SPAN and ABC.